I would like to share a quilt with you that I made for my mother, Ruby. She passed away in 1995. The quilt has 34 family photos on it. There are pictures of my mother, my father, my step-father, all four of her children (both when they were young and as adults), all the grand-children, and great grand-children. The pictures are done in an Attic Windows setting. Some of the photos are color and some black and white. A friend printed the photos onto fabric for me. At the time, products for printing photos onto cloth via your home computer printer were not available. I don't know how she did the images on cloth other than she used a large copy machine and what she called her "secret formula" of chemicals. The quilt has been washed and the images are still good. What I liked about her method was that the fabric stayed soft unlike other methods that were available at the time. 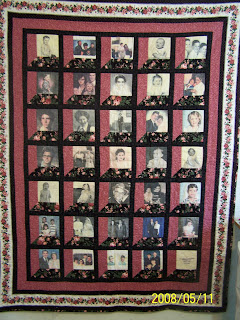 The second picture is a close-up of a photo of my mother when she graduated from nursing school as a Licensed Practical Nurse. 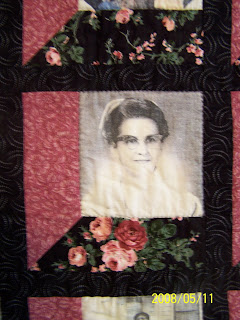 My mother did not think black fabric of any kind belonged in a quilt. She did not know I was making the quilt, even though she lived with us at the time. I struggled with what fabric to use for the settings and borders. Her favorite flower was the rose. I tried many different fabrics but kept coming back to the roses with a black background. I finally decided to go ahead and use that fabric as nothing else seemed to work. Mother could be very verbal about her opinions when it came to quilts. I took her with me to a local quilt shop once where she saw a quilt with a lot of black fabric. She said, "If I had that quilt, I'd just throw it in a corner and hide it." I was a bit afraid of what her comments would be about the photo quilt. I did not have it finished but gave her the quilt top for Mother's Day in 1994. She surprised me by actually liking it very much. She said it was the most beautiful quilt I had made as it had pictures of her on it! We had a good laugh over that. She asked that I not quilt it for a while because she wanted to take it with her on a trip that summer so she could show it off to several family members. She came home and told me how much everyone liked it. She wanted me to make photo quilts for a couple of the relatives.
Mother was born in 1913 in West Virginia. She lived out in the country. She was a good student and even went to school an extra year because there was nothing else to do when she graduated. She married and had three children, two boys and a girl. Times were hard and her husband was not working. She said there were holes in the floor where they lived, the kids were hungry, and things were not going well. She ended up leaving and getting a divorce. She left the kids with family and moved to Ohio during the war years to work at Goodyear Aircraft. That is where she met my father. They married and the kids came to Ohio to be raised by my father. Mother worked off and on during my growing up years. There was always a big garden and fruit trees. She sewed most of the clothes for my sister and myself. I don't remember about the boy's clothes as I was too young. She also sewed some for other people. Mother said she made quilt tops during hard times in West Virginia for a lady who could afford to buy enough fabric for two quilts at a time. The second one would be for my mother in payment for the first one. Mother said she did not do much hand quilting. Her sister did most of that.
My father died when I was sixteen. I was the only one still at home. My mother went to work at a plastics plant for some income. Then she registered for nursing school and attended classes for a year. Mother remarried but her husband had a serious stroke about two years into the marriage. She took care of him for quite some time. After he passed away, she went back to work as a nurse.
Mother lived with us the last ten years of her life. My husband still jokes today about having lived with four generations of women at one time! Our daughter and grand-daughter lived with us at the time.
Just wanted to share these memories with you on Mother's Day. Thanks for stopping by for a visit.
Karen

What lovely memories, wish my Mother was still alive, but she died May 18th, 1989, she is so bedly missed. Bobbin

This is such a beautiful family quilt for your mother. I love that attic window design and the black frame is striking to look. Thank you for sharing with us.
Wish you had a wonderful Mother's Day!

The quilt is really nice. I love all the pictures and what a wonderful family keepsake.

Happy Mother's Day, Karen, and I hope you had a wonderful day!

That is a gorgeous quilt full of memories. You are very lucky to have all those wonderful memories and the quilt to keep things fresh in your mind. Thank you for sharing!

What a beautiful quilt! I am so glad your mother loved it! Your story makes me laugh at how funny mothers can be. Very interesting bit of history. Your mom was a worker wasn't she.

4 generations at once! Your husband must be a patient man :) What a beautiful quilt full of so many memories to have made for your mom...wow she had quite a life.

Karen, Finally I could catch up your blog!
and Wow, This quilt is so beautiful with lovely memories of your mother.
Thank you for sharing!

Your quilt is a true family treasure! Thanks for sharing it with us along with it's story.

Karen thanks for sharing the story about your mum. It really is terrific hearing how others lives were..hugs Khris in Oz

This is so beautiful Karen,
I love how the photos are set in their own frames.
I made a memory CQ quilt last year,
Julia