No, it's not time for winter in Florida. "Time for Winter" is the name of the pattern I used for the wool table mat I just finished. Isn't the snowman cute? So roly poly! And most of the mat is made from recycled wool from thrift shops. The tongues turned out thicker than I would have liked as the darkest green is thick wool from a winter coat. The other greens I had just were not the right shade. The tongues have two layers of the heavier green, thus the thick tongues. And those tongues took about three times as long to make as the main part of the mat. Still, though, it went together fairly fast. I started yesterday evening and finished this evening. I did spend a good bit of time on it. I know I watched three DVDs yesterday evening while working on it. The pattern is from issue #62 of Quiltmania (the French magazine). The designer of the mat is Kathi Campbell from Heart to Hand patterns.

The blue green wool for the sky is from a ladies suit jacket. The green plaid for the ground is from a men's wool shirt. The black plaid must be a cashmere because it is so soft. It was from a man's suit jacket. 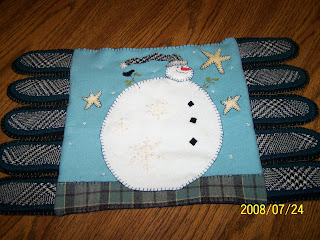 The magazine has some other patterns that I am interested in. I hope to make the cover quilt which is Jan Patek's "Rudolph & Co.". A couple other patterns hold some promise also. I have a subscription to the magazine. So far, I have only received one issue that did not have anything of particular interest to me. The subscription is a bit pricey compared to other quilt magazines here in the USA. I'm sure that has to do with delivery costs. 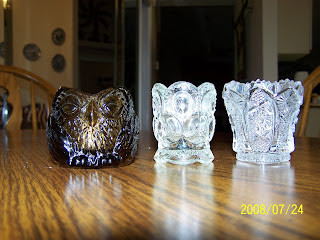 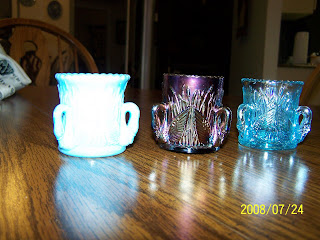 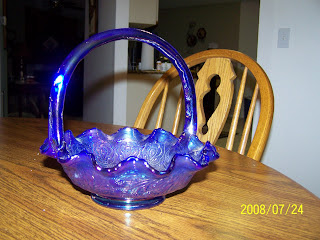 This will be my last post until we return from vacation. Hopefully I will have some new finds to show you at that time. Hope to hit a few favorite quilt shops on the trip. What's a vacation without a stop at a quilt shop? You know I need fabric!
Thanks for stopping by for a visit.
Karen
Posted by Karen at 10:05 PM 18 comments:

I have decided it is time to use some of those wool applique patterns I purchased. One pattern has been in my collection for at least three years. When I purchased it, I did not intend to use wool for the applique. In fact, I don't think I owned any at the time. After all, I live in Florida. Who has wool in Florida? Now I have it and want more. It is so easy to do the wool applique. I have a number of pieces that have come from recycled wool garments. When people move to Florida, I guess they bring those wool clothes with them and they end up in the thrift shops. Since I like the primitive/country style of quilts, this is one way to come up with some of the plaids and tweeds. I do like the hand dyed wool. I have not purchased a lot of it but plan on doing that more than searching thrift shops for used wool.

I have two finished projects to show you. The first is called "House on the Hill" It is a Buttermilk Basin pattern. I quilted this one and added a striped binding. The quilting was an experiment. I think I would have liked it better unquilted with backing and binding. Or maybe a thinner batting. But it is done and done is good. 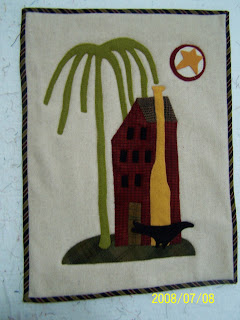 The second project I finished is a wool pillow. "Wait ,"you say. "She already showed that before." Well, this is a twin to the first one. The first one was a gift for a friend who likes primitive very much. Some of you may have seen a photo of the first one pop up on another blog. The recipient seems to be very happy with her gift. But I wanted one for myself. It is a one day project. Again, the pattern is by Buttermilk Basin. I just enlarged the design to make it a more suitable size for a pillow. 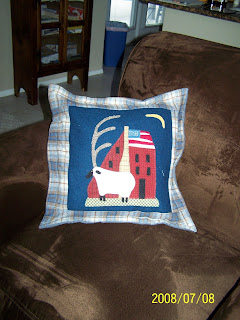 I have started a new quilt. I like the Fig Tree fabrics. They aren't my usual darks that I like but there is something about the aged look to the fabric design that appeals to me. I do like quilt patterns that involve circles so I picked this Fig Tree pattern called "Prairie Sweets". I thought it was going to be a more difficult block to do with the circular pinwheels with another circle of a contrasting fabric around them. I purchased the pattern online so I had not looked at the directions before purchase. How pleasantly surprised I was to find out the neat trick that is used to create the blocks. You start by making the pinwheel. Then you add four strips of the same background fabric used in the pinwheel. That's easy enough. Then you applique a circle around the pinwheel. Neat way to get the circular pinwheel without piecing curves! I have since purchased two or three more of the Fig Tree patterns. The designer likes to come up with easier piecing directions for what would usually be a more complicated block. I like easier!

I have pieced all the pinwheel blocks. I appliqued one ring around the pinwheel just to get an idea of what the block will actually look like finished. I am going to set the project aside for a bit as I am working on finishing the "Patchwork Garden" quilt I have shown you in two previous posts. Also, I have another wool applique piece almost finished. I want to get it out of the way. I need to make the big tree block for my Winter quilt and get it sewn together. Too many projects going at one time! 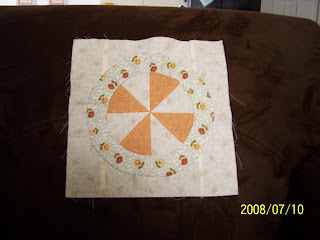 That's all for today! Thanks for stopping by!

I have been very lucky this past month. First I won a mini quilt from Stina for her 100th post. You have already seen a photo of that. Now I have won a little stitchery quilt from Andrea http://welshquilter.blogspot.com. It was a mystery prize for guessing how many piece she had cut out for a hand piecing project she is working on. The package arrived today. Imagine my surprise when I saw what it contained. She made a really cute embroidered quilt that says "Rain, rain go away". Andrea, you don't know how appropriate this is. We have been having rain every day this week and I have been thinking just that. She also sent a piece of brown fabric (I like browns!) that will be used in a reproduction quilt. I don't win things often, so winning twice in one month is really something for me. Thanks Stina and Andrea! 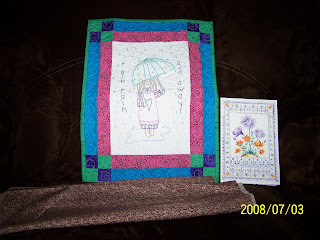 I was asked to post a closeup picture of a block in the quilt I made using my husband's grandmother's painted quilt blocks. See the previous post for a full picture. I am also posting a picture of what the painted blocks looked like before I cut them up. 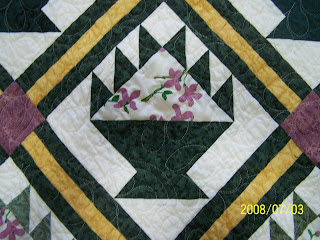 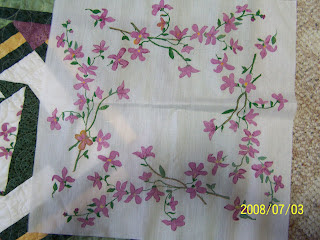 This is a photo of the label I put on the back. I described the label in the previous post. Grandma Jenkins did the painted part. I added a computer printed picture on fabric and gave a little information in the lower left corner. 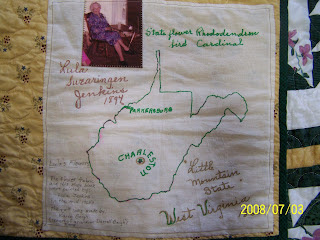 Tomorrow is a holiday in the USA. It is the Fourth of July. A celebration of our freedom. We will be staying at home. There are too many people out on the highways. We will be able to see a fireworks display right from our front door. I am posting pictures of two patriotic quilts I made. The first photo is of a bargello flag I made in 1999. It is machine pieced and quilted. Very easy to make. 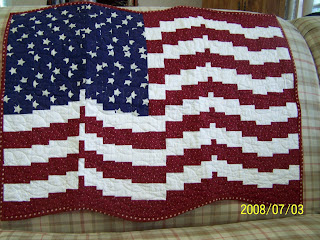 The next photo is of a quilt I made in 1996 called "Americana Star". It is machine pieced and hand quilted. 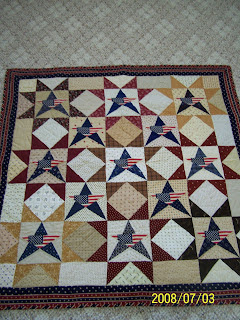 Finally, I am posting a photo of a top I finished just a couple days ago. It has a flag on the top, so I think it is also appropriate for July 4th. The quilt has wool appliques. It is from a pattern called "Midwest Pride" and was published in American Patchwork & Quilting's Quilt Sampler (Spring/Summer 2007). A quilt shop called "The Cotton Shop" in Perham, Minnesota was featured. This was the quilt the staff designed. I think it will make a great quilt to display in the summer time. 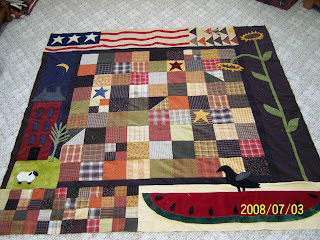 Thanks for stopping by for a visit!