I spent this past week working on a new quilt top and have just finished it. It is called "Hark". The pattern is from an older Red Wagon book called "Christmas or Not". I am not going to do the applique border as shown in the pattern. I am not sure what a cherry border has to do with angels. The cherry border would have gone in the light part. Instead of using one light background in that section, I used several pieces that were part of the main body of the quilt. I also used many of the reds for the final border rather than one red fabric. I will post a picture of it again after it gets quilted but I don't know when that will be. You have to like plaids to like this quilt! 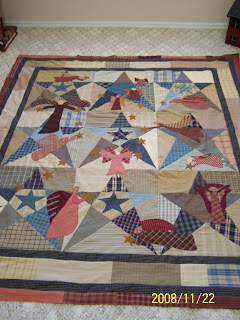 I also made a Christmas stocking last weekend. If I were to make it again, I would make the pattern a bit wider. By the time the stocking pieces were quilted and everything sewn together, it does not allow for a gift of much width to go in. I am going to do the same thing as Libby from a Simple Girl and make some stockings to be used as gift wrap instead of paper. It is something that can be reused instead of thrown away like paper. And I certainly have plenty of fabric to make stockings from. The stocking pattern is also for the "Christmas or Not" book. 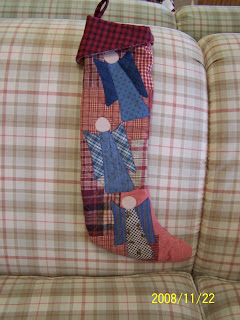 I am working on a secret project. I can't post a picture as it would be a for sure giveaway as to who was going to be receiving it. But it is oh so cute!


I thank all of you for your concern about my back discomfort. The pain is certainly less than it was but not cured either. But I can sew and that makes me happy!


We are experiencing cool weather in Florida. This is a bit early for us. In the past, I have served Thanksgiving dinner out by the pool when we had bunches of company. I think we had rain or some kind of weather problem last year at Thanksgiving time, but that was a first that I can remember not having decent weather for Turkey Day since we moved to Florida. I know eating turkey by the pool does not sound much like a traditional Thanksgiving dinner but it works for us.

Thanks for stopping by for a visit!

I love your Hark! The stocking is just adorable! Love those plaids!

What a great quilt! LOVE it! Cute stocking...you've been a very busy girl!

Oh Karen - I really love these new projects! I have that book - I think I need to dig it out and take another look. Oh dear - so many wonderful possibilities and so little time! How are you going to quilt the angels? I know how I'd quilt it, so I'm curious as to what you are going to do. And oh boy - how I do love plaids. First Kathie and now you - makes my fingers itch to get out a bunch of my plaids and start to play!

You know how I feel about plaids . . . which means I just love Hark!

I had a similar situation on some of my stockings - rather than using a fabric for lining, I used batting. I love how they feel - thick and cozy, but the batting took up too much space in the seam and in the turning. Well, they'll hold a gift card nicely anyway *s*

Hark is AWeSOmE! I love it so much. Stars... you can't go wrong :o) And plaid ones at that! Beautiful! I think you need to give me lessons!

The star quilt is so beutiful. Love the plaids and the angels on it.

Oh my you have been busy! :-) I really like your projects. 'Hark' is adorable~ makes me want to go play in plaids! :-)

Love the look of the Hark quilt...I haven't sewn anything in plaids for a while and it made me think it is time I did....I made some stockings last year that were not really wide enough for gifts..this year have made a couple more with a different pattern with the aim that each of the kids will get one.....well that's the plan....hope your back is holding up ok...!

Karen you have been busy..what an adorable "hark angels quilt"and your stocking is the perfect size for a digital camera and a thin box of chocolates..LOL
I can't wait to see what you have in store with your secret gifts you are so talented!! I am also happy that your back has not stopped you from making these wonderful things they probably help you forget!!

That book sure sounds like a must have!!!I LOVE plaids and I love your quilt and love your stocking...You are amazing... working with this and having backproblems...Im amazed...hope you take care of yourself..!!!

I love the quilt - but then I love all star quilts. :) blessings, maarlene

I wish your pictures enlarged, I want to see them close-up! They are so cute! I love plaid and the stocking is the cutest thing ever! And Thanksgiving dinner by the pool sounds delightful. What time is dinner?

I love that book! Your quilt top and stocking are awesome! I"ll have to dig my book out again!

I love that quilt and I love plaids!! I always seem to make stockings either too narrow or I over compensate and make them too wide...I think yours look perfect :)

Love your quilt, beautiful. I also wanted yot to know that I have nominated you for the Kreativ Blogger follow the link to find out more. http://creativehare.blogspot.com

Love your Hark quilt! Looks great! Great idea with the stocking wrap for gift giving instead of paper... 8-)
Glad your back is feeling better!
Happy stitchings!

Behind My Picket Fence said...

Karen -
Miss Faye here. Thanks for your get well wishes on (the other) Karen's blog. Gotta admit it's been a very rough week but next week I'm gonna blow this joint! I've had enuf of showing my rear end thru the back of my "gowns". Doesn't gowns sound like something you'd want to wear?
You've made my day!!

I have Christmas or Not also.I want to make something out of it soon.Love your quilt....Love plaids.

Hi Karen, I made that quilt myself too! It is at the bottom of my blog if you keep scrolling down. I did not put the borders on like the book either, too time consuming, but I just loved how it turned out! Even though it is in a chrismas themed book, I display year round, You did a really Great Job! Hugs, Mary

Wow Karen those are just fabulous! Hark is wonderful! Anything plaid gets a big leg up for me!

I love, love it!!!! I absolutely love your quilt and angel stocking!!!!stancy

Wow, I looked back at your posts and LOVE, LOVE, LOVE Jan Patek books and patterns too!! The Chrismas Blocks by Cherie Saffiotie - were they in a book? Oh, I just love them and in the back of future projects is the basket quilt by Jan Patek I want to make too!! Love all your work!!! Hugs, Mary

i love that star quilt with all the angels...it looks great!

I have that book, and I am recommitting myself to do either this project or something else out of that book. It is gorgeous. I can't tell, is it quilted? or just a top?