I have two new projects in the works. Both are from patterns by Cheri Saffiote-Payne. Both are smaller size projects. 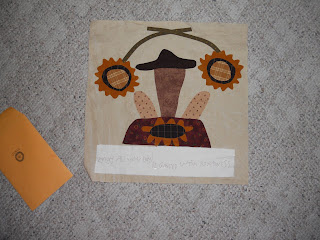 Above is picture of "Grace". I need to do the raw edge machine applique and then do the embroidery. The words to be embroidered say, "May all your days be graced with knidness". It shouldn't take very long to do.
Below is a picture of one of the little wall hangings in a pattern called "Sew Good". The pattern has three small wall hangings you can select from. This one needs the raw edge machine applique done and embroidering of the stems and words. The words say, "When this you see, think of me". It also has May, 2010 to embroider so I had better get busy because May is almost over. 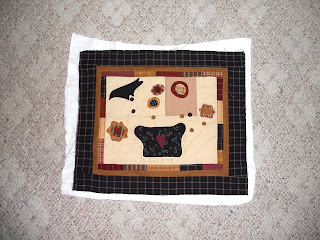 I like almost every pattern Cheri has put out. I know there are lots of other bloggers who feel the same way.
It is a beautiful day in Florida. The space ship Atlantis landed a little earlier this morning. My husband was outside and saw it go over our area as we heard the twin sonic booms. A safe landing.
I need to get busy. Have a great day!
Karen
Posted by Karen at 10:08 AM 30 comments:

I have stitchery basket blocks to share with you. I purchased a new camera today and definitely need to read some instructions. I couldn't find a place to crop the photos. A lack of time right now, so I will go ahead and post photos as they are.
The first stitchery is called "Flower Basket" and is from Chestnut Junction. Well, all of these stitcherys today are from Chestnut Junction. 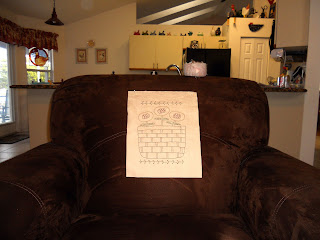 The second one is called "Basket 'O Gingers". 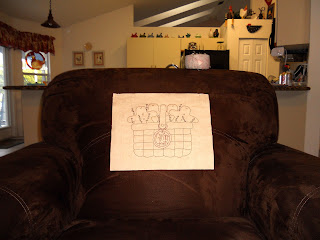 The third is "Basket 'O Crows". 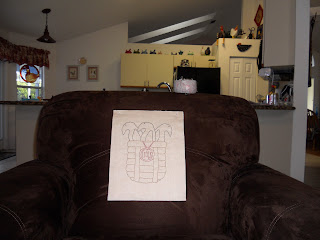 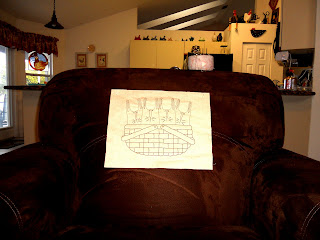 And the last one is "Basket 'O Pears". 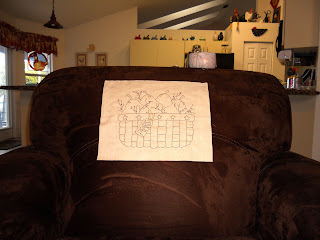 I am going to have to play some to get the hang of the new camera, downloading to the computer, & then finding the pictures to download to my blog in the way I want.
I'll be back soon with my pictures.
Karen
Posted by Karen at 6:40 PM 34 comments:

My camera would not cooperate so I only have one photo to show you today. I am going to have to retake pictures later on of my stitcheries that I have completed.

I am sharing a picture of the "Sewing Seeds" project that I am working on. The pattern is by Cheri Saffiote-Payne. It is ready for the raw edge machine stitching. The stems were to be pieced. I decided that, since the flowers were to be fused, I might as well do the same with the stems. One flower center is pinned in place as the fusing did not take. I have not been completely satisfied with the last batch of Heat 'n Bond Lite that I purchased. The paper is different than in the past and sometimes the fusing does not go well. 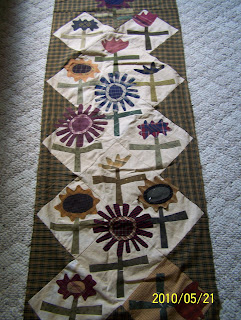 I have two more small Cheri pattern projects in the works, too. They aren't ready for a preliminary photo just yet.

Tomorrow is the Sew 'n Sews gathering day. We are going to work on stitchery projects for something different to do. Should be fun. Hopefully there will be some Show 'n Tell for me to take pictures of. That is, if my camera and I get along better.

Hello to all! We just watched the space ship launch from Kennedy Space Center. Well, to be more accurate, we watched what you can see from our backyard. There were some clouds and we lost sight of it sooner than some of the views of launches we have had. Still interesting to see.
I just completed a project. It is a stitchery called "Friends and Flowers" and is a Bareroots design. The stitchery will fit into a 5"x7" frame. I found this frame at a thrift store for $1.00 and it is 8"x10" but had the mat with the cut outs in it. The main opening was the right size so I covered the heart cutouts with the same pink fabric that frames the stitchery and made it work. 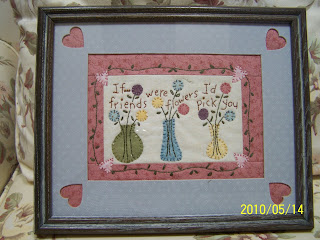 A couple days last week, I worked on covering triangle shapes with selvage edges that I have been saving from my fabrics. It was fun to do. Sort of like eating potato chips. You can't eat just one. I kept making triangles until I ran out of suitable pieces to sew on. 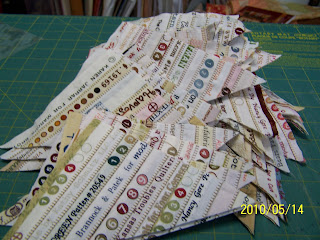 The triangles will be used to make basket blocks like the one shown here. I have only made one basket block so far. I am not in a rush to complete the project. 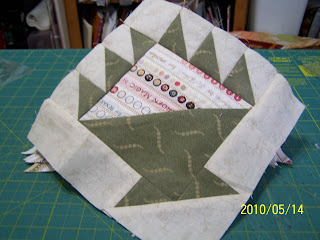 I have completed two more stitchery basket blocks and will show them in another post. I also am working on a Cheri design called Sewing Seeds. I don't have enough done on it to show just yet.
Thanks for stopping by. Come again soon!
Karen
Posted by Karen at 2:17 PM 46 comments:

Hello! And Happy Mother's Day. I am just back from a trip to Wally World (Walmart) to try and find a USB cord for my digital camera. The cord for my camera has gone on the fritz and I don't want to pay $25 plus shipping for a new one. No luck finding one at Walmart but the associate in the camera department suggested a card reader. You stick the card from the camera into it and insert that into the port on the computer. It worked fine. I am going to be looking for a new camera, though. Mine is taking lots of fuzzy pictures and it is not a purse size digital camera. I don't need anything fancy. 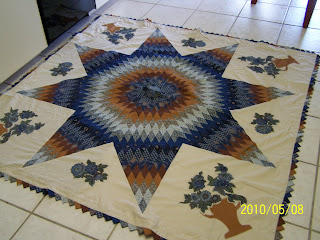 I am posting a picture of a Lone Star quilt top I made quite a few years ago. I had told two bloggers that I would show the top when I could find it and take a picture. Just kept forgetting to look through my quilts to find it. The quilt top is made with reproduction Smithsonian fabrics. This is from the first line put out. Seems to me there was a second line after that. I took a class taught by Cindy Blackberg. I remember having such a hard time picking which color way to go with. There was a blue range & a purple range. As you can see, I ended up with the blues. The class was mainly for learning to do the Broderie Perse technique but also making the Lone Star and a prairie point border. The reason I never quilted the top is that it developed a "pooch" in the center. I tried more than once to fix that. The more you rip out and resew the bias edges, the less likely it becomes to get things to line up. I could not get rid of the pooch. I gave up and did a flower over the center. I finished the underneath edges of the top and proclaimed this a table topper.
I saw on a blog recently (and I forget which one) that the blogger was using their old metal pot holder loom. I had one when I was young and loved to use it. The first evening I attempted to weave the loops through, I had a mess. I couldn't get the over & under parts in the right place. I made a pot holder but it didn't look right. The next morning when I got up, I looked at the pot holder and it amazingly looked like it should. Here my older brother taken it apart after I went to bed and remade it. He tried to make me think that I had done it right after all and that he had nothing to do with it. I quickly learned how to make them correctly. I had the loom for years but gave it away at some point. I bought a set later on for a grandchild but all that you could get at that time were the plastic looms. Just not the same. About a week after I saw the blog post with the metal loom, I found one in an antique shop and bought it. Who knows if I will ever use it. It is just a childhood reminder. 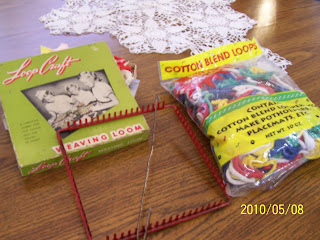 I found this pineapple doily in a thrift shop for $2.00. Seems to be in very good shape. A couple tiny brown spots but not noticeable. When I was 17, I made a pineapple doily. It was my first attempt at crocheting something. Well, it was supposed to be doily size. I followed the pattern directions but it ended up table cloth size. I don't know why. Possibly the size of the thread contributed to that. I don't think I really knew about thread size then. I never made another doily after that. A relative asked if they could have the one I made as she had a round table it would fit. I switched to crocheting afghans after that. 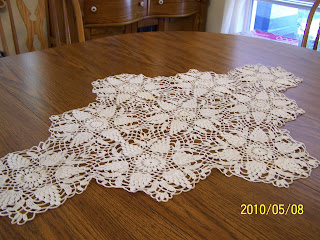 I have been doing some embroidery on basket blocks. I will do another post very soon and show those. I am also working on Sweet Land of Liberty (a Cherie Saffiote-Payne design). I started it in January of 2008. You can see the beginnings of it here. I got the first row done and a start on the second. Then I don't know why it got put aside. A fellow blogger is working on that design and has inspired me to get back to it. I stayed up until 2 am last night working on a section of it. I will show a picture on my next post.
Time to get shaking and get something done.
Karen
Posted by Karen at 11:44 AM 36 comments:

Welcome! A new month and a new May stitchery. The pattern is by Buttermilk Basin. 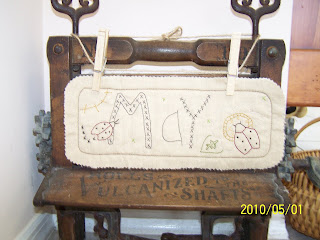 I am working on some basket stitcheries for a quilt. These are different basket patterns than the "Baskets of Life" quilt I showed here. I am using basket patterns from two different sources. Not all of the blocks will be the same size but most will. And I don't know if they will all go into one quilt. I am going to play with the setting when the time comes. I have at least fifteen patterns to select from and I think I have some more smaller ones I can choose from. It is hard to photograph the stitcheries so that the design shows well. The basket patterns are all E-Patterns which means you select the designs, pay, and then they are e-mailed to you for printing out. 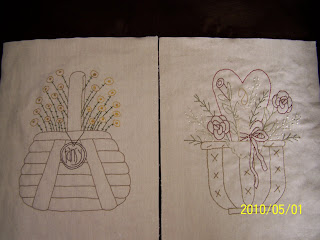 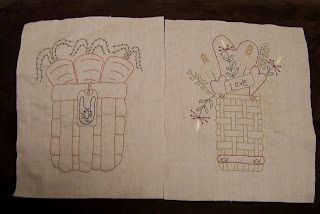 The basket on the left is "Basket O'Carrots" from Chestnut Junction. The block on the right is "Love Basket" from Primitive Stitches. I am enjoying doing the embroidery on the blocks. I have another one started with crows. 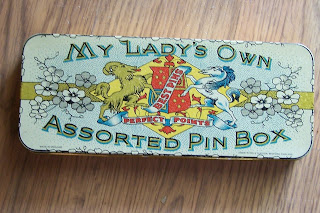 The pin box is a gift from a good friend. Good friend, I want you to know how much I appreciate you. It reminds me of a box my mother used for her pins. Not the same shape or design as hers but a reminder none the less.
That's it for today. I need to ponder on what projects I want to work on for May and get those goals set. Come back soon.
Karen
Posted by Karen at 9:35 AM 41 comments: