I finally picked up the basket blocks off the living room floor and sewed them together.  You might get the idea that we don't use the living room much and you would be correct.  The floor became a design wall for the basket blocks.  I just didn't have the oomph to pick them up and sew them together.  I still have a stack of blocks to applique and had intended to make the quilt bigger.  I decided that the quilt top is big enough.  It is approximately 80" x 80".  The left over stack will be given away and someone else can applique and make a quilt of some sort. 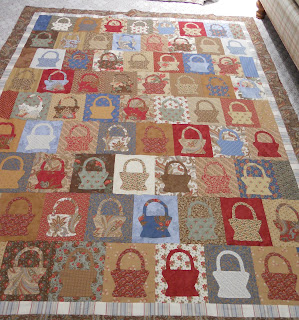 I did not end up using the border fabric I had intended to use.  I had the Portobello Market fabric that has a brown background with mushrooms on it that was to be the border.  I decided it was too busy with the business of the basket blocks.  I had a good size piece of a paisley from the same line and used it instead.  I have enough of the mushroom fabric to use for the backing.  I ended up using an offset on every other row so that the baskets did not line up straight up and down on the quilt.  I am not too sure that I like the quilt very much.  It may end up finding a new home.  I have to think about it for a bit.

Barb from "Fun With Barb & Mary" blog inspired me to buy some solid orange fabric and a few other solids to use with it.  If you haven't seen her orange quilts, pay a visit here and see them on two different posts.  It makes you rethink orange.  I have a design in mind for the fabrics.  And it put me in a mood for another design using orange.  I did some online shopping and have ordered some of Sandy Gervais' solids which have a bit of mottle to them.  Stay tuned. 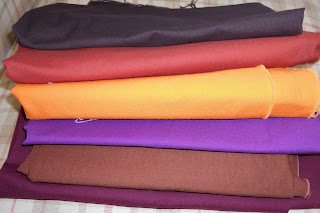 I have finished the set of twelve stitcheries for each month.  I am saving the remainder to show at the beginning of each month as I have been doing since last April.

I have the two August blocks from Raggedy and Friends ready to embroider and am going to sit down and start on them now.

Have a good day.

I think that's a great quilt! I love basket quilts!

I LOVE the basket quilt. And off setting the rows gives it such an interesting twist, Are the whole baskets appliqued to the bg fabrics? I have some basket patterns I need to dig out and get to work on. Lovely job!

Your basket quilt is STUNNING!! Keep it...you will grow to love it!! You have inspired me to make a basket quilt!!
Take care!
Paulette

I agree with Paulette, the quilt is wonderful and you should definitely keep it. I think the idea of offseting the blocks was great. It really adds movement to the quilt and stops your eyes from roaming in a directional manner and makes you sweep it all in. I actually hadn't noticed the setting until you mentioned it because my eyes registered the whole quilt instead of just rows. Excellent job!
I know the feeling of wrapping up a project and still not loving it but maybe when you quilt it your feelings might change. For me, the quilting will either make or break my indicision.

Oh Karen....this quilt is so YOU (and me)! It is absolutely wonderful and I'm so envious that you have no trouble with basket handles! Someday I hope to make one just as pretty as yours...again someday as I haven't a clue what number that falls on my list of what-to-dos! You know how that goes! Well now it is up off the living room floor and hopefully on a bed in your home soon!

I would love to use my living room floor for a design wall but I would be spending too much time getting the dog and cat hair off the blocks!!

Well, girl, I LOVE LOVE LOVE the basket quilt, and I especially love the offset!! :)

I love the offset idea and makes the quilt so much more interesting! You may like it better once it's quilted- like my Vicksburg.

Your basket quilt is just adorable...I love baskets in any way shape or form. I did a small basket quilt for a baby one time...just loved it.

Well I really love the quilt! And those are such sweet baskets. I love how they are cut.

Karen, I love it!! It is so scrappy and pretty! You are really moving along there girlie! Lots of things accomplished :o)

Hope you are feeling well and your back and knee are holding up. Glad to hear you aren't going to be hit by "Earl!" I always think of you whenever there is a hurricane and hope you won't get it.

I LOVE your basket quilt, and I bet it will grow on you as and after it is quilted. I have been appliqueing the little Blackbird Design baskets (the ones set on point with the little peep holes), but don't have quite enough for the quilt that I have planned. I like how you offset the rows, and the colors are beautiful.

My cat doesn't allow me to lay out blocks on the floor anymore...they would all end up in a messy heap.

I bet that felt so good to get your baskets into one whole...it looks wonderful! I have been intrigued by the oranges too...hmmm...

Julie in the Barn said...

Wow, what a beauty. I bet it feels great to get it all assembled.

I agree with everyone else! The baskets are wonderful! Your quilt reminds me of the basket quilt from Blackbird Designs book "When the Cold Wind Blows." Love, love, love it! :-D
Beautiful work!
I'm intrigued by those oranges (and your collection of solids have a decidedly fall, leaf-turning, octoberfest, All Hallow's Eve cast to them, don't they? Can't wait to see what you have in mind!
Blessings,
Mary Lou

Basket quilts are among my favorites. Yours is gorgeous, Karen.

Don't do anything with it til you're absolutely sure because you might regret it.

the basket quilt is great....sometimes, I like to work with solids...they are a respite from busy prints

Well I just love it, I think you should keep it! LOVE the off-set baskets.
Yummy solids - I have a wee bit of orange I'm saving for something special, I really want to make a quilt out of nothing but solids. I'll have to check out Barb's blog, thanks for the link!

I agree, it is a gorgeous basket quilt, I love the fabrics and the way you offset the blocks....you should keep it!!

If you feel your basket quilt needs a new home, would you consider my home? I would love it and treasure it for sure. I like the offset block idea. I like the colors in your fabric stack, especially the purple!

So pleased you went with the offset baskets. I just knew they would look great! What a wonderful quilt this turned out to be, and large too. If you made it full size, it would truly be a whopper. Love your solid fabrics - looks like you have a fall project in the works for sure!

LOVE your basket quilt top!!! I just love basket quilts! Found an interesting one in one of my sister's books and can't wait to make it. But first, I must finish a few projects.

I think your quilt is beautiful. It was a lot of work for you, and I'm sure it will grow on you.

The quilt look fab, love it!

I think the quilt is great. I love how you've offset the blocks. So much nicer than the normal straight setting

Your Baskets quilt looks fantastic! Maybe you are a little bit sick of looking at it and after a break from it, you may fall in love with it again.

I enjoy the creative way you set these baskets. I enjoy the interest it creates. Here's hoping it works it's way into the right heart (even yours). *karendianne.

It is wonderful Karen... sometimes a quilt wont speak to you until it is finally finished.. so just give it some time..and it might be one of your most loved quilts..:o))

I think the quilt is lovely but donating a quilt to a good cause is a good thing too :0) I really like the offset of the baskets, really added interest to the quilt.

I look forward to seeing your orange quilt :0)

You must be kidding: you being not too sure you like this quilt!! It is super, great, fabulous, gorgeous euuhh ran out of words hihi! Love the way you have placed the baskets, offsett, super! Love the fabrics you used!! Maybe you have enough left overs for a pillowcase? Happy sewing, hugs, Daniëlle

love your baskets and the setting is very clever!!! love your blog, too! just found it!! pat

Thank you for the link to Barb's orange quilts...loved them!
And the basket quilt looks wonderful. Great idea to offset the rows. And like the others have said..wait till it's quilted, you may fall in love with it...like we already have :-) Lovely work!

Your basket quilt top is fantastic! The colors are wonderful - great job.
Hooray for orange - I can't wait to see how you'll use it - thanks for the shout out ;O

What a pretty quilt! and it's huge! No wonder you had to keep it on the floor! You did great job with the fabrics you used!

Your basket quilt is just beautiful! I need to make a basket quilt! Definately on the to-do list, after seeing yours!

How the heck did I miss this beauty? It's fabulous, Karen!!!

Wow, do I love that basket quilt top!

Love the basket quilt and it is on my to do list too.

I also love the wool embroidery you did.

Your basket quilt is awesome. I love it. I've been wanting to make one of those myself.

Your baskets are beautiful! I know what it's like to not be sure though. I had a sad dislike for my double wedding ring when I finished piecing it but when I started quilting it...oh, it was love!

Looking at this adorable basket quilt, it's hard for me to believe you're having doubts about it. I have felt that way before, and it's always nice to hear comments from other quilters that can change your perspective.

So....just like everyone else...I have to add that I love these baskets, and your idea of off-setting the blocks makes it even more interesting.

Hopefully, after 40+ comments, you are feeling a little better about the quilt.

I think your basket quilt came out great! You may just be a little too close to it now...wait a few weeks...

Btw when I took my Baltimore Applique class I sat next to a quilter whose mantra was "orange is a neutral." She used some in every block! at the end of the year she converted me!

OOOO! I just love your basket quilt. Your Sept. stitchery is so cute too.