I had no idea what a steamer basket is and now I know.  This one will never be used on a wok.  What a great idea to add such a pretty decorative wool piece to the lid.  No, I didn't make it.  I am not that good at embellishment.  My friend, Karen made this.  The lid is dome shaped.  She added batting behind the wool circle, glued it all down, then added decorative trim around the edge.  She is using it for a sewing supply basket.  She is going to add a covered cardboard circle inside the basket as the basket bottom is woven slats.  That will keep anything from falling out....like a needle. 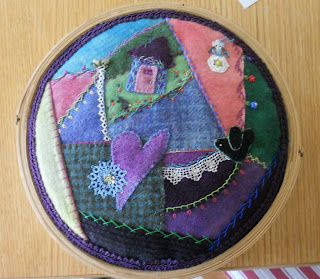 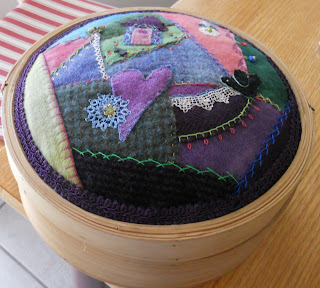 I thought you might enjoy seeing something different.  Karen was lucky enough to find the steamer basket at a thrift store.  She says they usually have three bottoms and only one lid.

Thanks for stopping by for a visit.
Karen
Posted by Karen at 7:59 PM 31 comments:

There was a time when I said I thought saving selvage edges from fabric and incorporating them into a quilt was just going too far.  Well, this is the second time I have been playing with selvage edges so I guess I have proven myself wrong.  Below is "Big Brown". 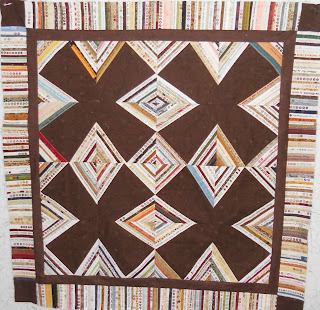 ﻿I have been saving the edges for a good while now.  Last year, I sewed some of them to squares of fabric but have not done anything with them.  I was on "The Selvage Blog"  a  few days ago.  There is a quilt on the sidebar that is called "Big Red".  There is also a link to "Online Quilt Museum".  It was on this site that I saw a version called "Big Brown".  The only difference in the two is that one has used red fabric and the other used brown.  I pulled a piece of dark brown from stash and began working on the piece.  I used a lot of the more interesting words from the selvage edges in the center part of the quilt though many are on the borders too.  And I used lots of dotted sections.  Have you noticed that the selvage edges on some of the fabrics have become more interesting?  For instance, "Fruitcake" had colored bell shapes instead of the dots.  Another had colored butterfly shapes.  I hope to see more of this in the future.  The older edges have just the manufacturer named on it.  Later ones included combinations of the fabric line name and/or the designer's name.  And some the year.    I think the earliest edge year I had was from 1992.  I set all the edges from reproduction fabrics to the side for using later on though a few made it into "Big Brown".  The quilt was quite easy to make.  Now it will be set aside to wait its turn for quilting.
A few days ago, I finished piecing "Monet's Wedding Ring" from Judy Martin's "Scraps" book.  The book can be seen in my last post and is available from Amazon here.  Your local quilt shop would appreciate you purchasing it through them, so that is another option. 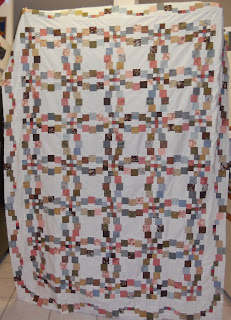 I had intentions of making the queen size version but ended up doing twin size.  The quilt just seemed so busy to me.  The size is 66 inches by 90 inches, if I remember correctly.  So that is still good size.  It involved lots of cutting and lots of sewing.  Mr. Log Cabin is doing what he can by standing on a chair and holding the quilt top for the photo.  I can tell you that the illusion of rings is better able to be seen in this little picture.  Just looking at the quilt in person, I have a hard time seeing it.  The design would be good made in lots of tiny florals, if you are so inclined.

It is late, so that's all for tonight.

It's the second Saturday in July.  Time for this month's Christmas Quilt-Along.  This time round I am not doing a specific Christmas design quilt.  I am working on a queen size quilt that will potentially be a Christmas gift.  It is a lighter quilt than I normally do.  A somewhat pastel look but more to the darker side of pastel.  Here are the fabrics I cut with the exception of the lighter tone on tone polka dot I chose for background. 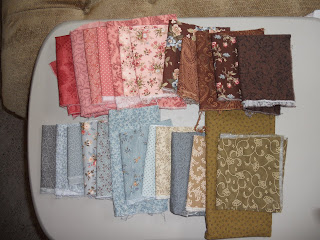 The quilt pattern I am using is called "Monet Wedding Ring" and is in a book by Judy Martin titled "Scraps".  The one I am making is shown on the cover on the upper left side. 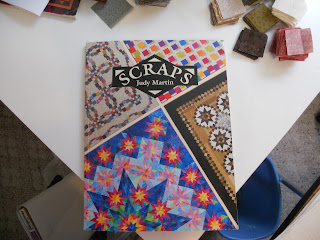 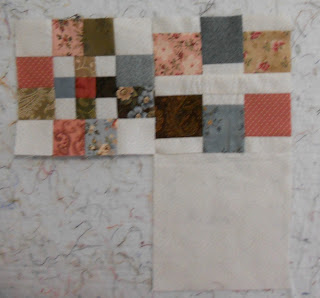 It doesn't look like much yet but at least I am sure the parts are cut to the correct size.  Now I can start zipping them through the sewing machine.

Back later with my progress.

My "Family Gatherings" quilt is completed.  Mary from Quilt Hollow did the machine quilting for me.  Mary does such good work.  If you have not sent her one of your quilts for machine quilting in the past, think about doing that.  I don't think you will be disappointed.   The quilt has been waiting for me to do the binding for a while. Sometimes it is hard for me to get excited about putting binding on a quilt when there are other quilt projects calling my name. 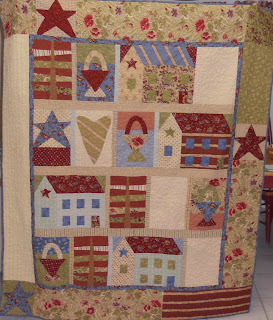 The pattern is by Jan Patek in case you are wondering.  The applique on this quilt is fused and machine stitched.    Most of the fabrics used were from Moda "Gatherings".  Who doesn't like a quilt with houses and baskets! 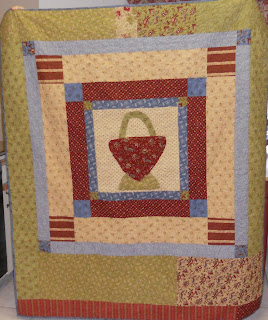 Above is a view of the back of the quilt.  It was a fun addition to make a larger version of the basket pattern and incorporate it into the backing.

A rainy day here.  I am not complaining as we need the rain.  But it sure has made me feel lazy.  Thanks for stopping by and taking a peek at my finished quilt. 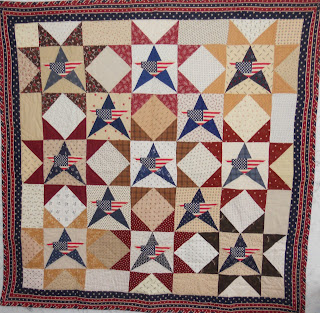 Happy 4th of July to those of you in the USA!


The flag quilt is made from a Red Wagon pattern many years ago.
Karen
Posted by Karen at 1:21 PM 24 comments: