I am participating in a block of the month that Lori of Humble Quilts organized to make the quilt "A Little Porch Time".  The pattern is in a book by Lynda Hall.  The first block is a house. 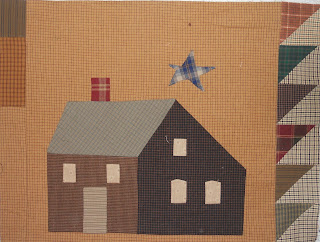 My hope is that doing it with a group will keep me inspired to get the quilt top done.
Karen
Posted by Karen at 10:40 PM 15 comments:

"SHEEP IN THE WILLOWS" PART 2

I have more completed blocks to share for "Sheep In the Willows". 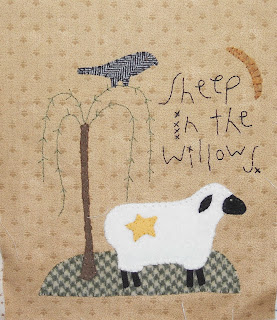 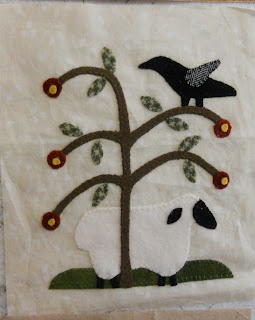 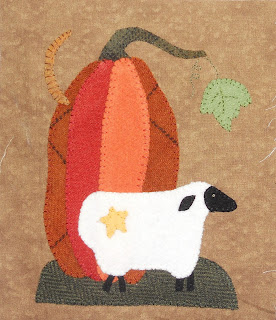 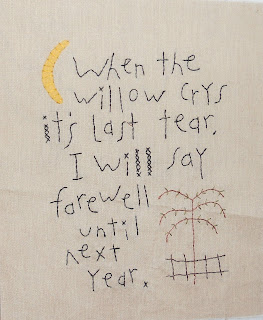 And now all the blocks are stitched and ready to be gifted to a good friend.  She can finish the project as she wishes.  Here is a picture of all the blocks. 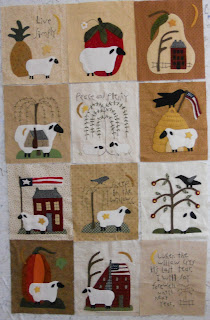 I am in the mood today to work on a patriotic project.  I pulled out "Sweet Land of Liberty" and am trying to figure out what block is next.   It is our Memorial Day holiday here in the USA.   Hope you have a good day doing whatever you choose to do.  I will be sewing.
Karen
Posted by Karen at 10:02 PM 21 comments:

"Comfort and Joy" section two is complete.  You can see the first section here. 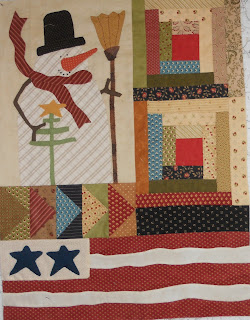 I am enjoying making the blocks.  I am using a combination of cottons with touches of wool.  Most of the fabrics are Moda by Brannock and Patek.  I am doing this a section a month along with some other quilters.
Here is a list of other participants and links to their blogs.

I am enjoying making the blocks.  I am using a combination of cottons with touches of wool.  Most of the fabrics are Moda by Brannock and Patek.  I am doing this a section a month along with some other quilters.  Now on to section three.

Today I am sharing pictures of some wool blocks I have stitched and some embroidery blocks.  First up are the wool blocks I stitched this past week.  The patterns are from Buttermilk Basin and are the "Sheep In the Willows" set. 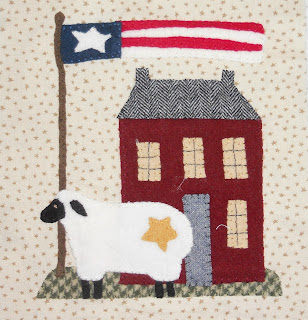 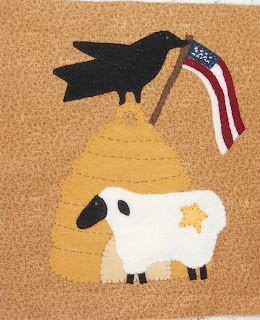 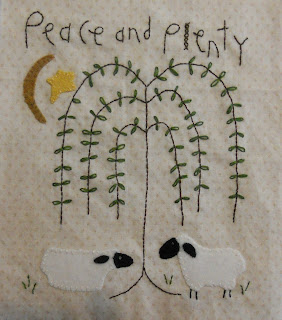 And a picture of all that are completed. 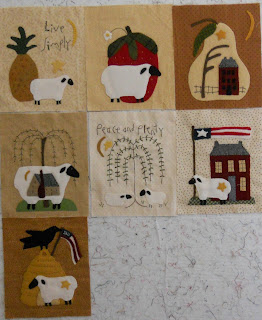 I have been picking up a set of Annie embroidery designs and working on them when we have traveled or when I want to do something different.  There is one for each month of the year.  I find that embroidery does not photograph all that well.  I have decided that these are going to live with someone else besides me.  November is partially done and all of December left after that.  I have some other embroidery blocks I want to work on.  The embroidery blocks are all on the same fabric but don't look that way in the pictures. 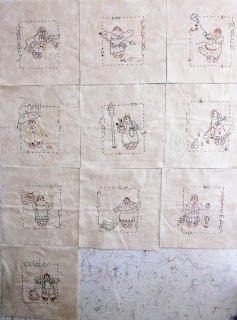 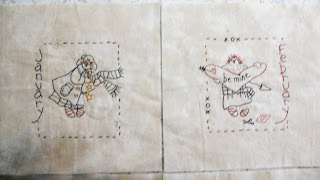 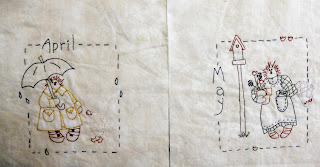 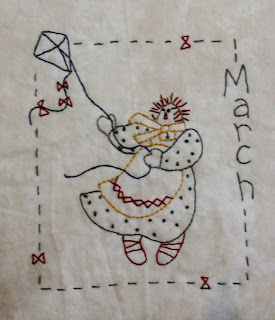 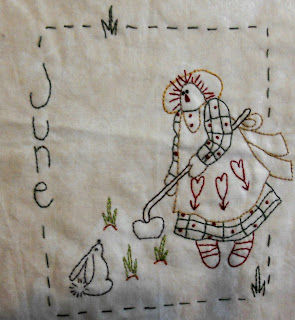 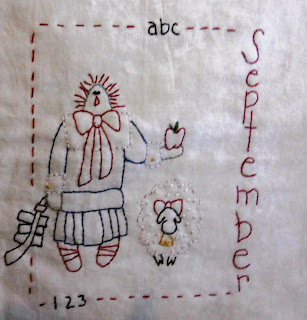 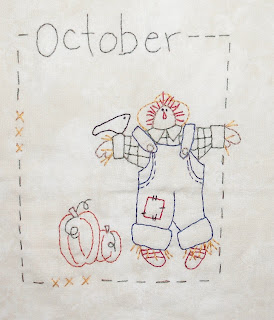 The pattern set for Annie is by Cedarberry Stitches.

Nominating your favorite quilts and voting for your most favorite quilt for the Blogger's Quilt Festival is going on now.  Stop by for a look at all the quilts if you have not already done so.  Click here for the nomination form.  Click here to view the quilts.  There are over 600 quilts.  Something for everyone's taste.

MY ENTRY FOR BLOGGER'S QUILT FESTIVAL

I have never entered a quilt into the Blogger's Quilt Festival but decided I would this time.  It is fun to have a chance to see so many quilts without leaving home to do it.

I am entering  a wall hanging size quilt I named "Summer Flower Bouquet".  I finished the quilt back in March and I have shared it with you previously.  It is hand appliqued and machine quilted. 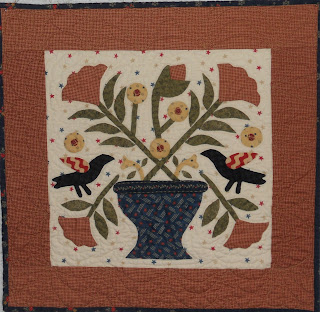 I started with an applique design in one of the Electric Quilt Programs with folk art applique designs.  I changed the design of the vase and the yellow circle flowers are different than the original design.  Some of the leaf shapes were changed.  I used fabric from stash.  When it came to the machine quilting, I decided to free form quilt swags for the border.  Just quick chalk lines and hoped for the best.  After the quilt was finished, washed, and dried, the swags looked much better than I thought they would.

Stop by Amy's Blogger's Festival to view all the quilts and maybe enter one of your own.  There are lots of prizes.  Enjoy!
Karen

WATCH BIRD I AND MORE

An old project has moved to the completed top category.  This is where the project ended last year in March. 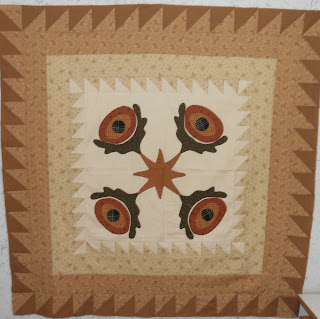 I guess I ran out of steam or the want-to's and put the project away.  Last week I discovered the project again, found the book, and began the border applique.  More than once, I wanted to quit as I think the piece is too dull but I made myself keep going.  Someone will like it even if I don't in the end.  Now it looks like this. 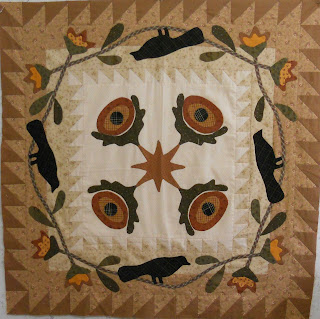 The pattern used is called "Watch Bird I"  and is by Cherie Ralston.  Found in a Red Wagon book called "Another Dozen".

I have some more completed blocks to share with you that go to other projects.  First is the third block for "Across the Wide Missouri". 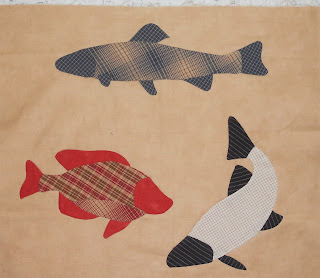 And another applique block for my Ohio Miami Valley quilt.  I can't decide if this is a lamb or a dog.  It was a block used in more than one of the antique quilts shown in the book. 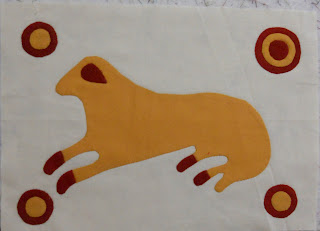 The last block was made by my friend Lorraine.  A signature block that will go into the Ohio Miami Valley quilt project. 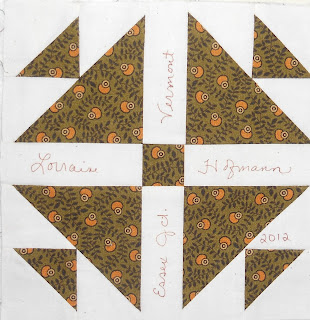 And another applique block for the quilt made earlier in the month.  I forgot to post a picture of it. 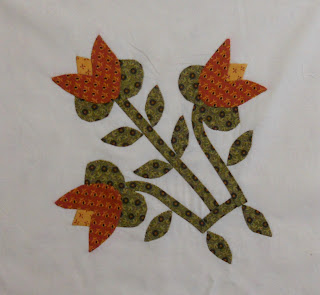 It's stitching time for me.  "The Young and the Restless" is on.  I usually stitch while I watch/listen to it.  Thanks for stopping by.
Karen
Posted by Karen at 12:37 PM 25 comments:

Join me in wishing Lori of Humble Quilts a very happy 50th birthday today.  She is running in a half marathon today (I don't know the proper term for the event).  Not something I could have done at age fifty.

I share with you the wall hanging I made for her Jubilee Celebration. 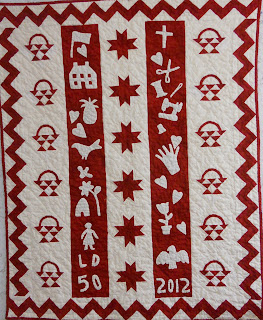 The pattern I used is called "Red and White Favorites" by Linda Sawrey.  It is available through Temecula Quilt Company.  I made some changes to the applique by adding in the shape of a woman, Lori's initials, the "50" for her fiftieth birthday, and a sewing machine.  Lori likes funky so I know she won't mind the chopped off wherever they land zig-zags for the border.  I enjoyed making this red and white quilt for a special friend.

"Across the Wide Missouri"

I started on a new applique project to work in among my others in progress.  This one is "Across the Wide Missouri".  The patterns are by Edie McGinnis and Jan Patek.  I completed the first two blocks.  I have one more block prepped.  Then I will need to cut out more parts for the rest. 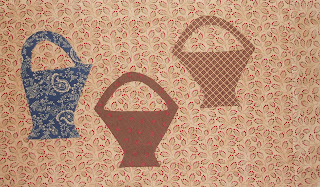 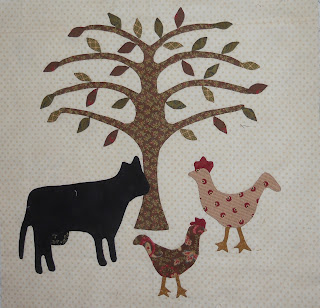 The basket block goes in the lower left corner of the quilt.  The blank space will have a pumpkin that overlaps onto it from the border.

I changed the header picture to the flower baskets for a very May spring flower look.  That is the quilt top I did for Mary of Quilt Hollow.  I made some of the blocks for myself but still have more to do.  That is another project I need to work on.

Back to my stitching.
Karen
Posted by Karen at 1:13 PM 25 comments:

HOT OFF THE PRESS

I just finished pressing the last border of "Christmas 101".  And now it is ready for layering and quilting. 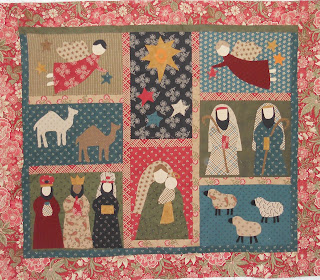 The applique was fairly easy to do.  I was doing a block in between other project blocks but decided to plunge in and get it done.  I mentioned previously that the pattern I used is by Jan Patek.  The majority of the fabric is from Moda "Remembrance".  That is the same fabric line that I used for the "Millennium Garden" quilt which you can see here.  It has a different look in this new quilt than it did in the Millennium piece.  I often get an e-mail asking what pattern or fabric I used so I am trying to at least mention the pattern each time I post a picture of a block.

I also finished another block for the "Collections" quilt.  My poor logs got off kilter the further I got up in creating the log house but I am going to leave it as is.  I don't think it is as crooked as it looks in the picture. 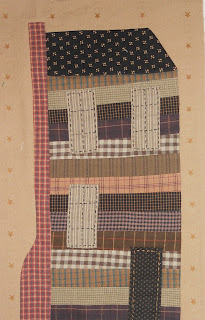 Thanks for stopping by for a visit.
Karen
Posted by Karen at 3:31 PM 32 comments: