It has been over a week since I posted.  I have stitched this past week and have some to show.

I haven't made any of the Snowbound blocks in a good long while.  I added two and I think I have five done now.  These were Bunnyhill free designs in 2010 so I am way behind. 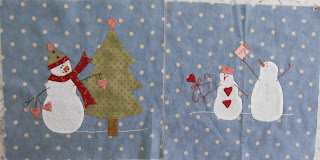 Next is a Cheri design called "Piece and Plenty".  A smaller size piece.  If I were to make another, I would probably do wool applique instead of cottons like this one.  Another one of those black birds! 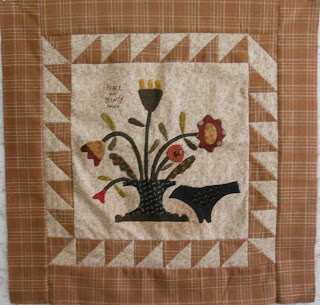 And the last thing to show you today is my progress on the row by row snowman quilt.  This is about a third of the applique that goes on this particular row of the quilt.  The trees are from wool.  The rest cottons.  A lot of small parts to add yet and a house on the other end of the row. 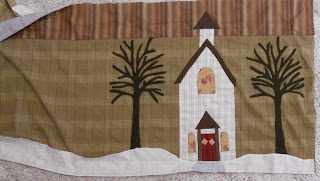 I have to stop work on this row as March is almost over and I still have two Sally Post Floral blocks to make.  I got one done yesterday of the three for the month.

I found a newer blog yesterday called "Simply Put".  She designs quilt patterns and is presenting an eight month mystery block of the month.  Not free but for a small charge of $10 for all.  Five applique blocks and three pieced.  Prim style which I like so I signed up.  The first three blocks were already available and were sent by e-mail in PDF form.  Here is a link to the blog if you care to have a look.

The day is fast getting away from me and I have stitching to do.  I will be working on those Sally blocks.
Karen

That is a lot of appliqué but beautifully done. I just finished piecing my wool quilt and adding the extra blocks, now i need to find a spot that I can get a straight on shot.

As the snow swirls in the wind outside right now, I think your snowy projects are not only wonderful, but timely. What did the groundhog know anyway?

Lots of lovely quilty blocks/quilts! Too cute! Love them all.

Your crow piece has a half square triangle turned top right corner...or planned? It's a great piece! You know I love it and your snowmen...perfect.

I thought I recognized those snowmen. I am not making that quilt but I do remember how cute they are. Love the church block.

I love your snowmen. It's cold enough here to build some only we don't have the snow!

Bizzy! You are so bizzy! But it all looks fab! Greetings
Lida

Beautiful things going on at your place. I especially love the snowmen.

You have been busy this week!! I love the way you mixed cotton and wool appliqué......hadn't thought of doing that!! And what an enabler you are......had to sign up for that cute BOM, too. Like I need another project.

I crown thee , Queen of applique. Everything is just beautiful.

Adorable project Karen. The snowbound blocks are so sweet!

Really great blocks Karen. The snow is very appropriate for around here. Just think the stuff is melting and we get more LOL.

oooo I really love both of your snowmen projects. :D

Your snowmen are coming along nicely. I love the background you chose for them.
I love the other appliques. Can understand why you would choose wool to applique next time. I finally got to start a wool wall hanging. It feels wonderful to sew on it.