A Finish and Works In Progress

Hurray!  A finish.  I hand quilted a small piece.  It is called "Piece and Plenty" and is from a pattern designed by Cheri Payne.  The only place the quilting really shows is in the darker tan fabric.  The backing is a small print similar to the background on the front of the quilt.  The thread color blends in so well that it does not show. I used elements from a quilt stencil that I have and it gives texture to the piece.   I remember when I first started making quilts, I showed one of my quilts to an older lady that worked at the local quilt shop.  The backing was a print fabric and I had hand quilted it.  She said I wasted my time hand quilting because I had not used a solid background so it would show.  Well, I do like to see fancy quilting but I also like print backings.  So her disapproval did not change my mind.  I left the one quirky triangle in the border just because it was quirky.  So not perfect but that's the way it is. 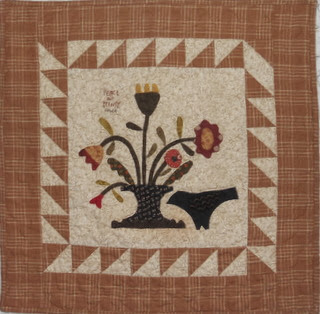 I am down to eleven blocks left to applique for the Sally Post quilt I am making.  I decided to prep all the blocks  so I can just grab one and stitch and get them done.  I pulled the block storage notebook out that I made last year.  It has zipper pouches to store each block and its parts in.  This is what it looks like. 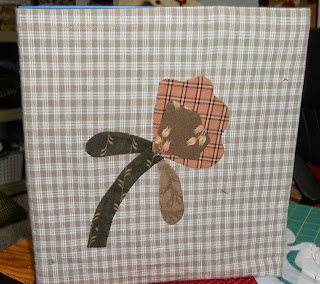 Much to my delight, look what I found when I opened it. 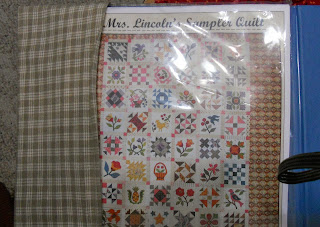 The Mrs. Lincoln's Sampler Quilt pattern I have been looking for.  You can see the quilt here.  I had all the applique blocks done.  When I prepped the applique block parts, I also cut out the pieced blocks.  I took the notebook on a trip but left the pieced block parts at home.  So they were never in the book.  But when I got ready to sew the pieced blocks, I could not find the pattern.  I searched and searched.  I finally printed out a picture of the quilt pattern cover from Lori Smith's website and worked from that picture to piece the blocks.  It has been months and the pattern remained lost.  Well, this is why.  During a clean up in the sewing room, I put the notebook up on top of the book case.  Never opened it up as I had no applique blocks stored in it.  I should have looked to see if anything else was in the notebook.  I don't need the pattern now but at least its whereabouts are known.  Mystery solved.

I will share two works in progress with you.  The tops are completed and await quilting.  The first one is "A Good Night".  Another Cheri Payne pattern.  It is wool applique on cotton.  It will make a good prim addition to my holiday decorations.

The second is also a Cheri pattern.  "Embrace Each Day" is what it is called.  This one is also done with wool applique on cotton.  The log cabin blocks were made with scrap pieces that I won in a give away that Cheri did.  So appropriate to use them for one of her patterns. 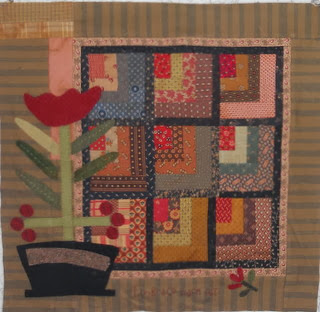 I hope you enjoyed the photos of my projects.
Karen
Posted by Karen at 6:21 PM 31 comments:

I have had the applique pieces cut out for "Frost On the Fern" for a long, long time.  The urge to work on it finally came.  I have the central block done and it is a large one. 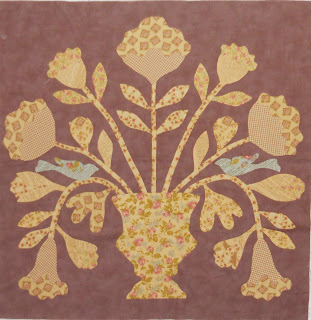 Now I need to decide what to do about adding a yellowish rickrack between the block and the border.  That is the way the pattern is done.  The local quilt shop has large, soft colored yellow rickrack by the yard but it still would need to be tan dyed over that.  I don't have good luck getting the rickrack to end the way it should at the corners and that is why I hesitate.  I am thinking of using a narrow piece of one of the yellow fabrics folded in half instead.  The border applique is going to take a while as there is a lot of it.  The pattern I am using is by Blackbird Designs and from the book "When the Cold Wind Blows".  I am not in a hurry to finish this.

Next, I have wanted to do the basket quilt by Cheri that is in the Primitive Quilts and Projects magazine.  The Spring 2012 issue.  The pattern is called "Baskets and Petals".  The top went together fairly quickly but still needs quilting.  The pattern measurements say 27 inches by 36 but I did not measure my final piece.  I did the baskets using needle turn applique instead of piecing the main body of the basket and then doing an applique handle.  I am happy with it. 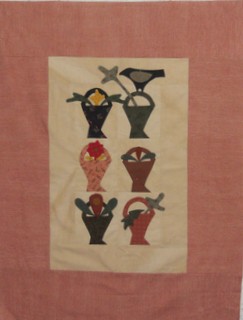 Busy, busy here.  Have a great evening.  I am heading back to the sewing room.
Karen
Posted by Karen at 7:52 PM 22 comments:

I finished the "Mary Ellen's Garden" quilt top yesterday.  I thought I was taking a picture straight on but turns out to be a bit of an off-kilter shot but here it is. 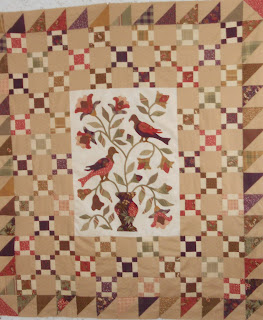 I was asked the size and I looked up the pattern dimensions.  Says 45 x 52 inches.  There are some left over scraps that I am thinking about now as to what they would make.  Maybe some basket blocks.  But at least the fabrics are folded and in a stack and not on the floor for me to trip over.

I plan on doing some applique today and some thinking about quilt projects.  I hope you get to do the same.
Karen

I pieced all the blocks that surround the applique block for Mary Ellen's Garden.  All put together and ready for the pieced triangles for the border. 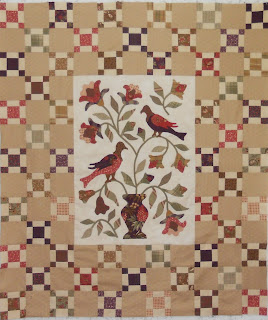 I did some of the animal applique blocks for the Noah's Ark quilt while we were on vacation.  I just never shared the pictures.  Some of the animals are not what we think of as having been on the Ark.  The patterns are by Country Threads. 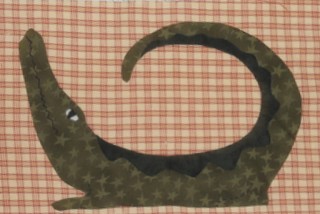 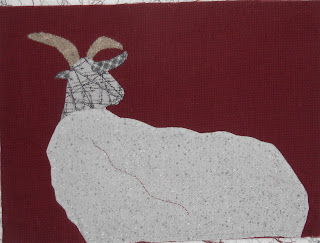 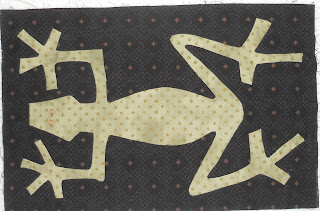 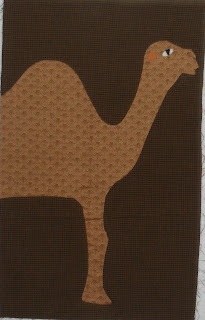 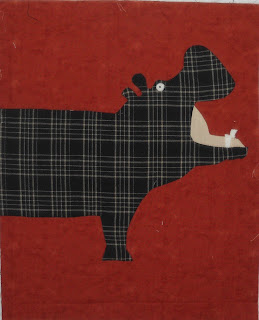 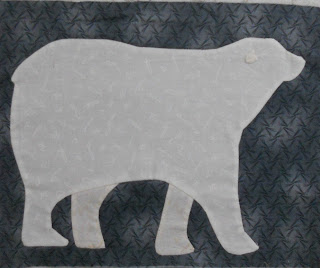 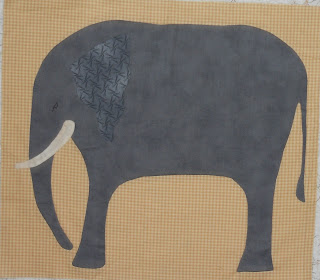 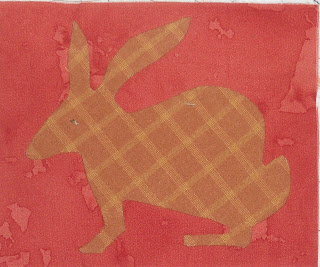 Rabbit (I think I have shown this one on a previous post.)

I have lots of stitching to do.  Hope you enjoyed your visit.

THE BEGINNING OF MARY ELLEN'S GARDEN

I finished the applique center for a pattern by Lori Smith called "Mary Ellen's Garden". 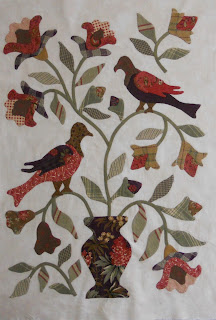 If I were to make another with the same fabric, I would probably make some changes in what fabrics I put where, but I am not changing this any further.  I did substitute fabric in two places.  So much going on that it is hard to get the big picture when cutting out little parts.  Most of the fabrics are from a Moda line by Jan Patek called Rites of Spring.  The rest of the quilt will be pieced.  Those parts are not cut out yet.  If you care to take a peek at what the quilt design looks like, here is a link.

I am close to finishing another large applique center for a different pattern and that is what I will be working o this afternoon.  That will make three quilts that will need further work.  I am heading to the stitching chair in just a few minutes.  Check back with me soon.

BIRDSONG HOT OFF THE SEWING MACHINE

My "Birdsong" quilt top is hot off the sewing machine.  I just finished sewing the last borders on.  DH is holding it up for a picture and he doesn't have wide enough arms so this is the best picture I could get. 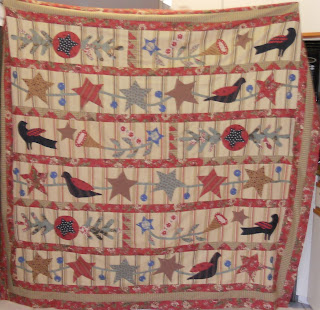 The pattern is by Jan Patek and I used Liberty Garden fabrics which are what are shown in the pattern.  I started this quilt a good while back.  A good friend had started making one of these.  She did a couple of the star sections and her busy schedule got in the way.  She finally decided she was not going to finish the quilt.  So the finished blocks and the rest of the fabric came to me.  I added Liberty Garden fabrics from my stash.  I did a row and set it aside.  A number of months later, I did another row or two and set the project aside.  It has sat in a basket beside the chair I do applique in for months and months.  A couple weeks ago, I decided to clean up in that area and put things away.  The quilt parts came out again and I decided it was time to just get busy and finish.  The applique was not at all hard.  I am pleased with the end result.  Now I have to make backing and think about the quilting.

The background for the quilt rows is Moda twill fabrics.  Different to work with.  When I think of twill, I think of a heavier, coarse fabric similar to denim but the Moda twill is not like that.  It has a soft hand but does ravel easily.  I used my serger to stitch around the backgrounds to prevent that.