Paddling As Fast As I Can

First up, I just finished my third basket block for the "Piece and Plenty" block of the month.  This block  was designed by Jan Patek.  Beware if you have downloaded the pattern set.  Watch the direction of the pattern pieces on this block.  Some are reverse from the block design and some aren't.  I doubt Jan had anything to do with the direction of the pattern pieces as this was a joint effort between several designers and Moda U.  I had to re-cut some of the pieces.  And I left off the triangles on the main part of the basket.  With such busy fabrics, I thought it looked better this way.  I am working from a kit and the fabrics used are from Moda Madeira. 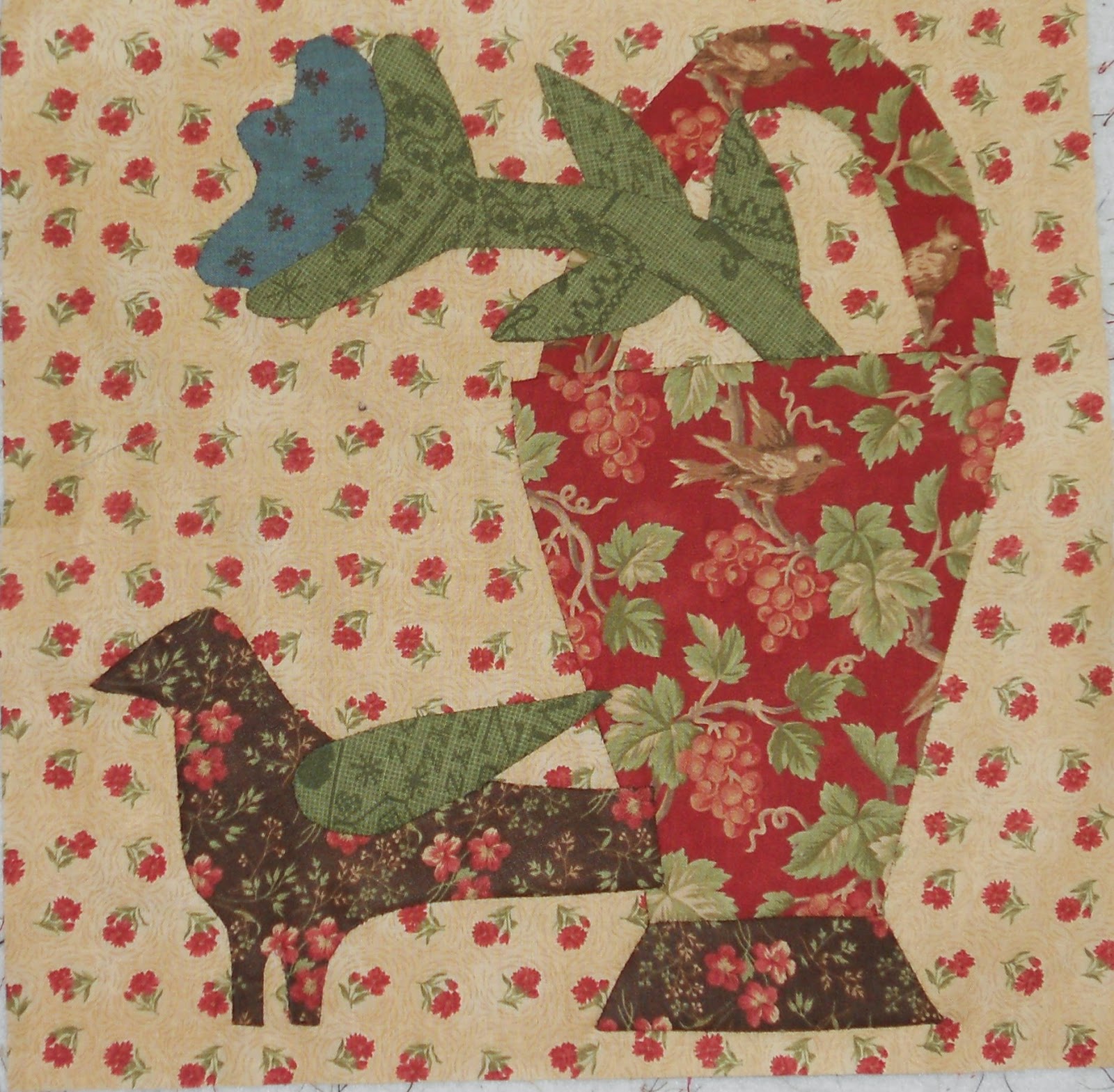 Next, I finished four more blocks for "Sweet Grace" which is a Jan Patek design.  The pineapple blocks took some time to make.  I pieced the triangle sections that are the centers of the pineapples.  Then the outer part of the pineapple was placed over that and stitched.  And several more parts to be added.  I changed one of the corner designs as the shape did not seem to make much sense for the pineapple block.  I finally figured out it was a smaller flower shape from another block but hardly recognizable in the small size.  I changed it to a star. 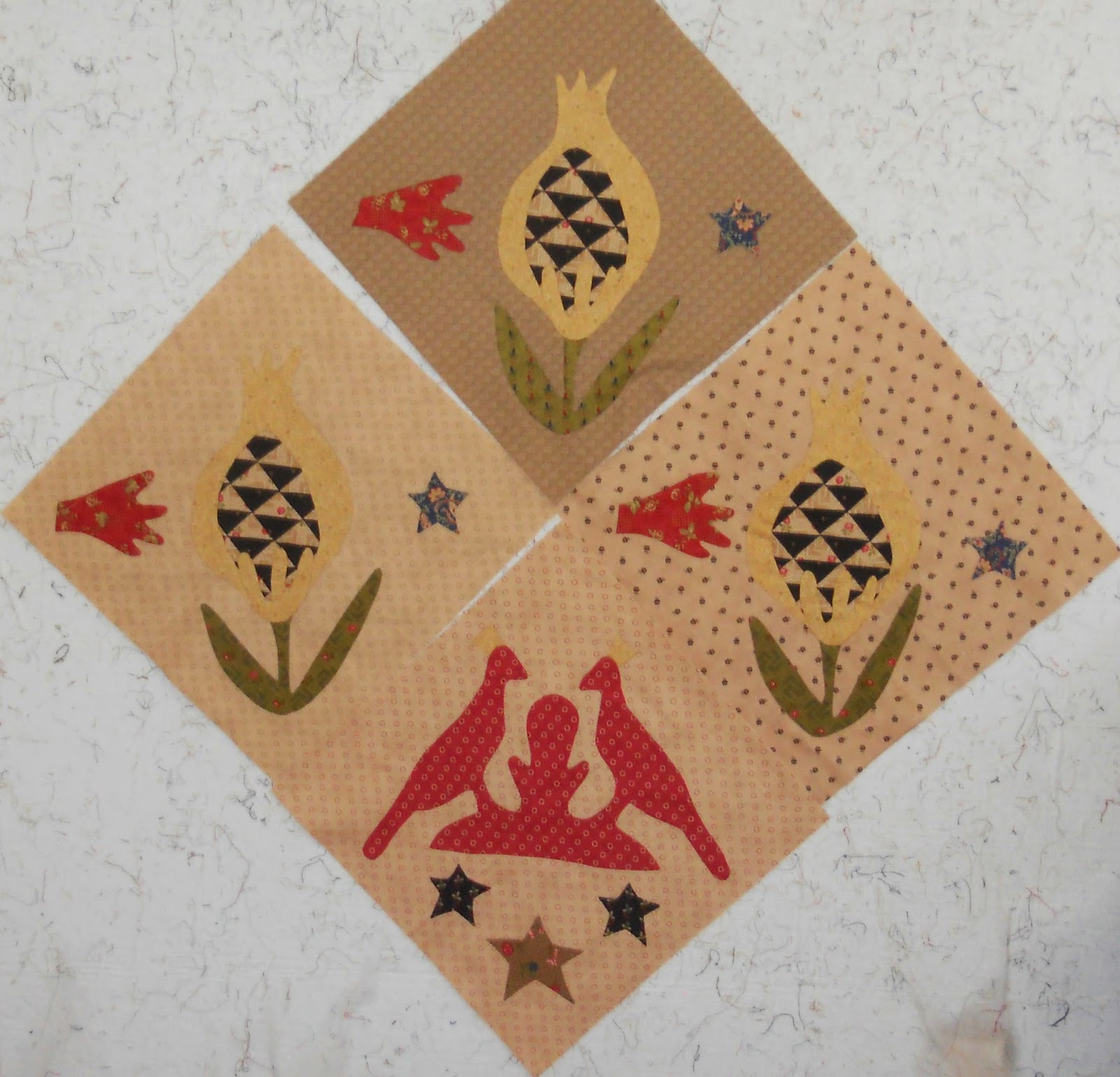 I did one block from a set of patterns by Laural Arestad called "Celebrate the Holidays".  I chose to set the block on point and make a small quilt from it.  It is the Easter block and will be used for a gift.  Another bunny though nothing like the others I have done lately.  I used a combination of cotton and wool for the applique.  The green border fabric (also on the back) has been in my stash for ages.  Finally a use for it. 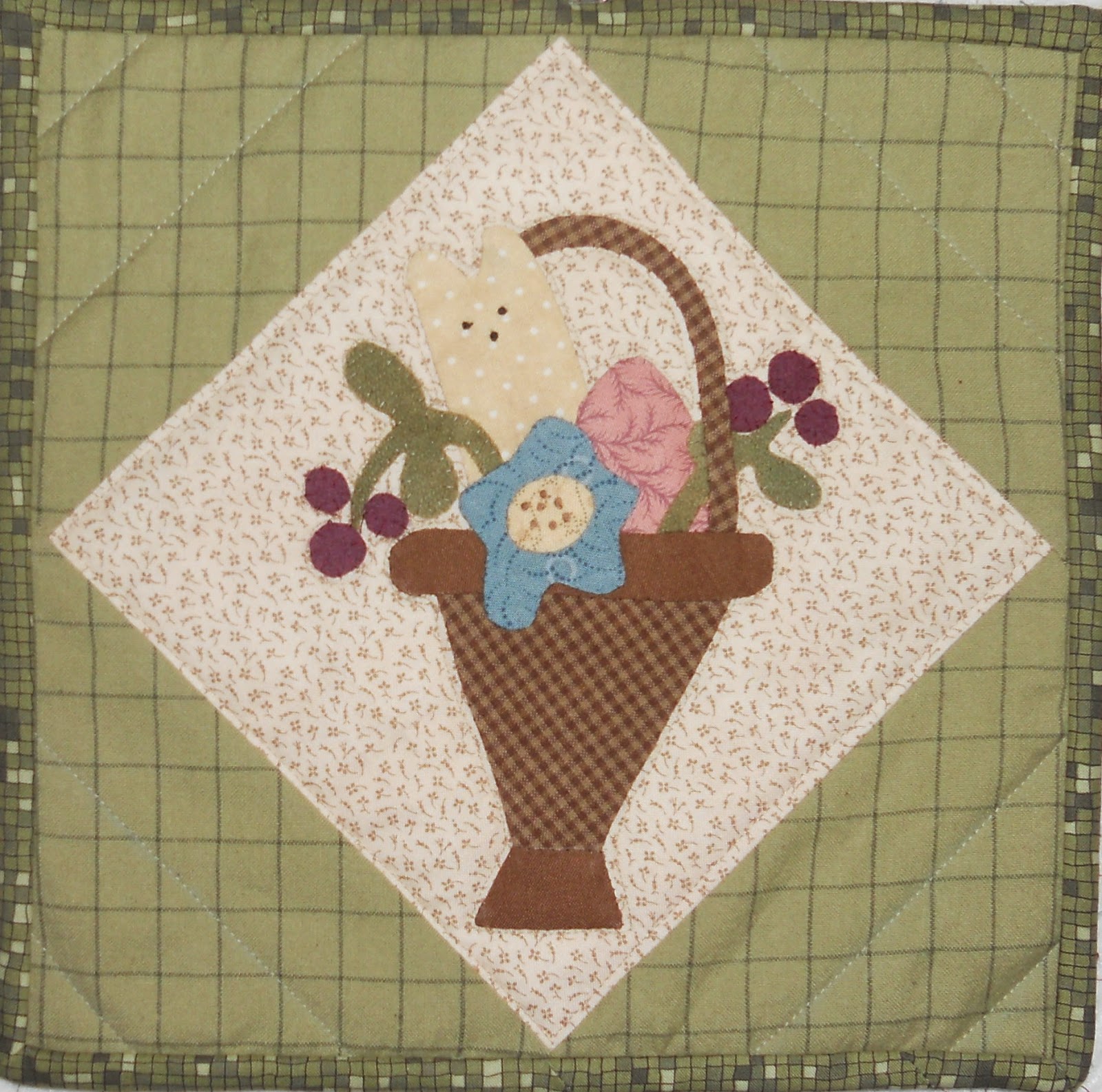 And finally, the third and fourth blocks from Kathy Schmitz's "Simply Red" pattern booklet.  If you remember from last month, I am doing mine in blue.  I should make some of the pieced star blocks that go with these but no time right now.  These are fused designs and the edges stitched by machine.  And some hand embroidery added. 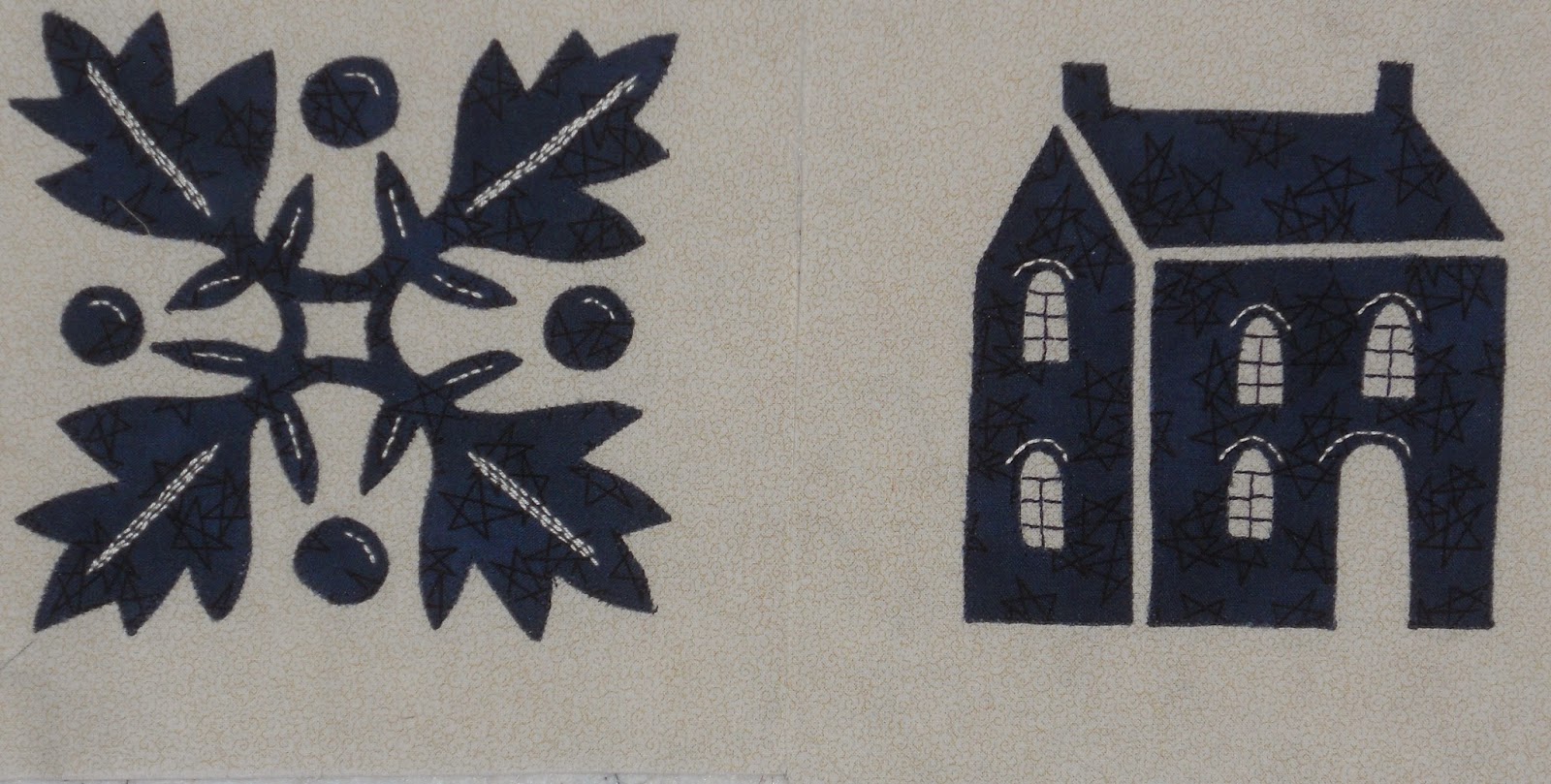 Continuing on with bunny quilts for spring, I have finished another one.  This wall quilt is made from a Cheri pattern called "24 Carrots".  It can be found on Cheri's website "Wednesday's Quilts". 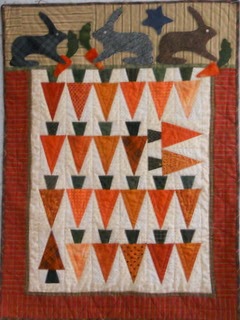 When I began to work on cutting out carrot pieces, I had thought I could use the Tri-Recs tool.  I am not good at piecing those long pointy pieces.  I discovered that the Tri-Recs tool is not the same angle as required for the carrots.  I decided to paper piece them and that is not a favorite method for me.  I used the freezer paper method of paper piecing.  For a visual, I refer to this post on Quilting With Ragdolls.  Maybe there is a You Tube video that covers the method but I have not investigated that.  You do not sew through the paper using this method.  My one tip would be to have a teflon coated foot for your machine.  Your foot will at times be running over the waxy side of the freezer paper.  The coated foot will glide over it.  If you are using your freezer paper pieces over and over, the heaviest of the wax is gone and the foot not necessary.  And Cheri style for the carrots, one is upside down and two on their side.

I used wool for the applique bunnies and carrots at the top.  A quick and easy way to do it.

My previous post showed my "Patchwork Garden" quilt.  Mary from Quilt Hollow did the machine quilting.  In some of the comments, I was asked to share close-ups of the quilting designs.  The photos are courtesy of Mary. 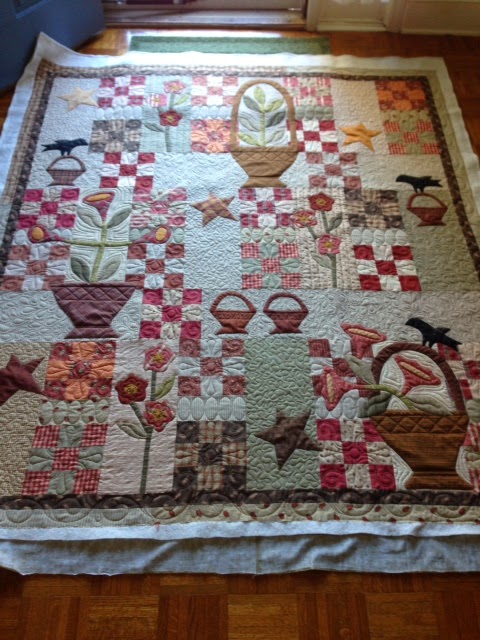 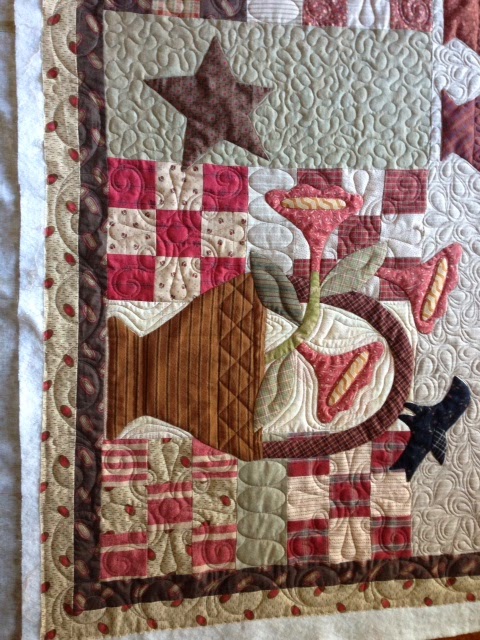 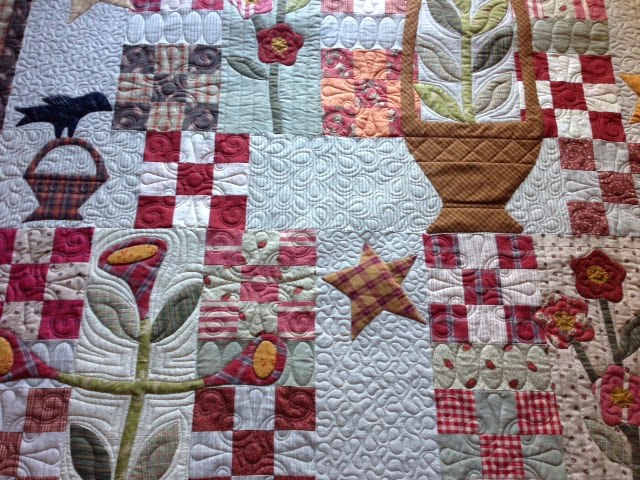 Quite some time ago, I completed the applique on "Patchwork Garden" but it hung in the closet without being quilted.  Finally, out it came and shipped off to Mary of Quilt Hollow for machine quilting.  She did such a good job on custom quilting it for me.  I love my quilt! 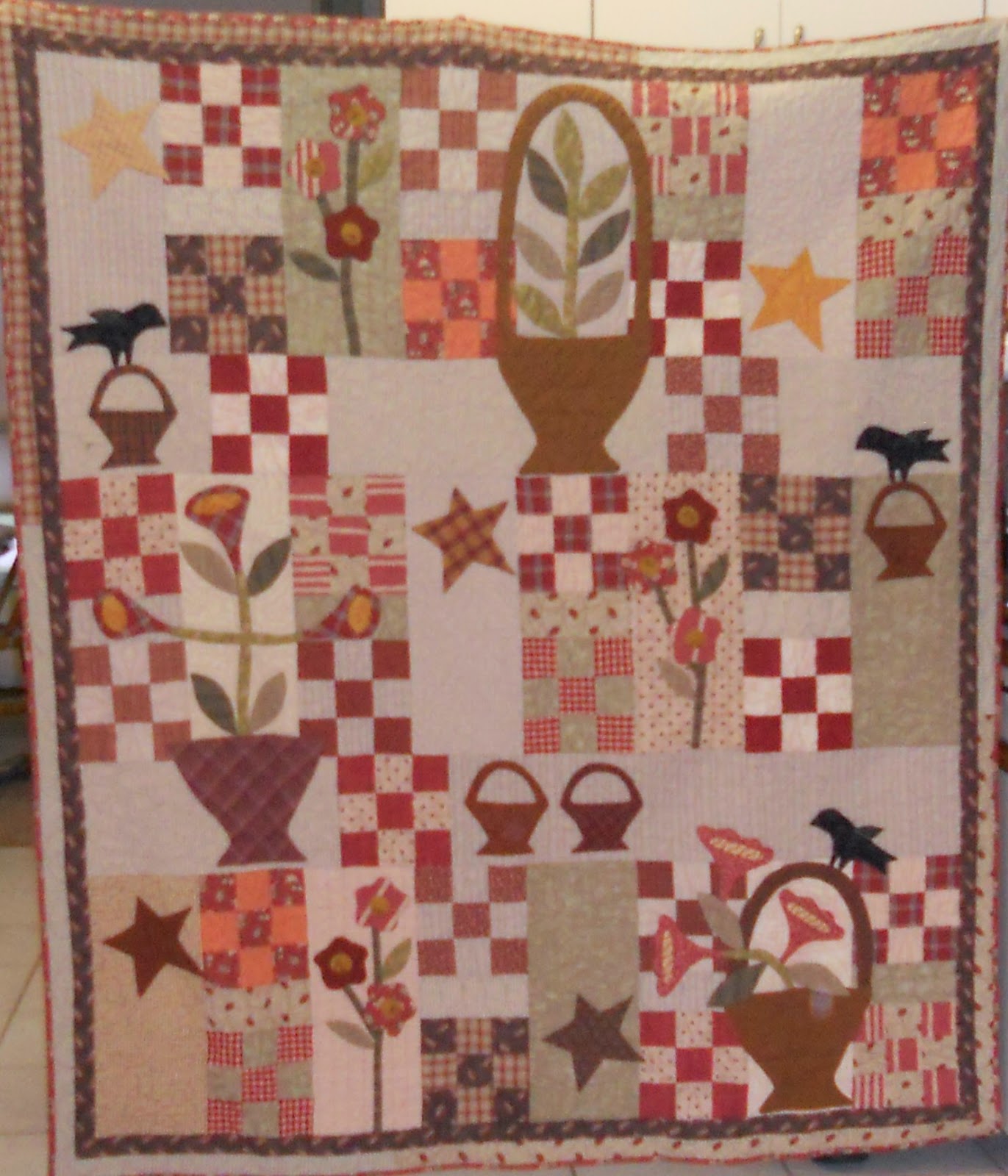 The pattern I used is by Jan Patek.  I had some of the fabrics Jan used in her sample quilt and those I didn't have, I selected fabrics from stash that had a similar look.  I am pleased with the result.  For the backing, I chose to do some pieced blocks to add in.  This is what the back of the quilt looks like. 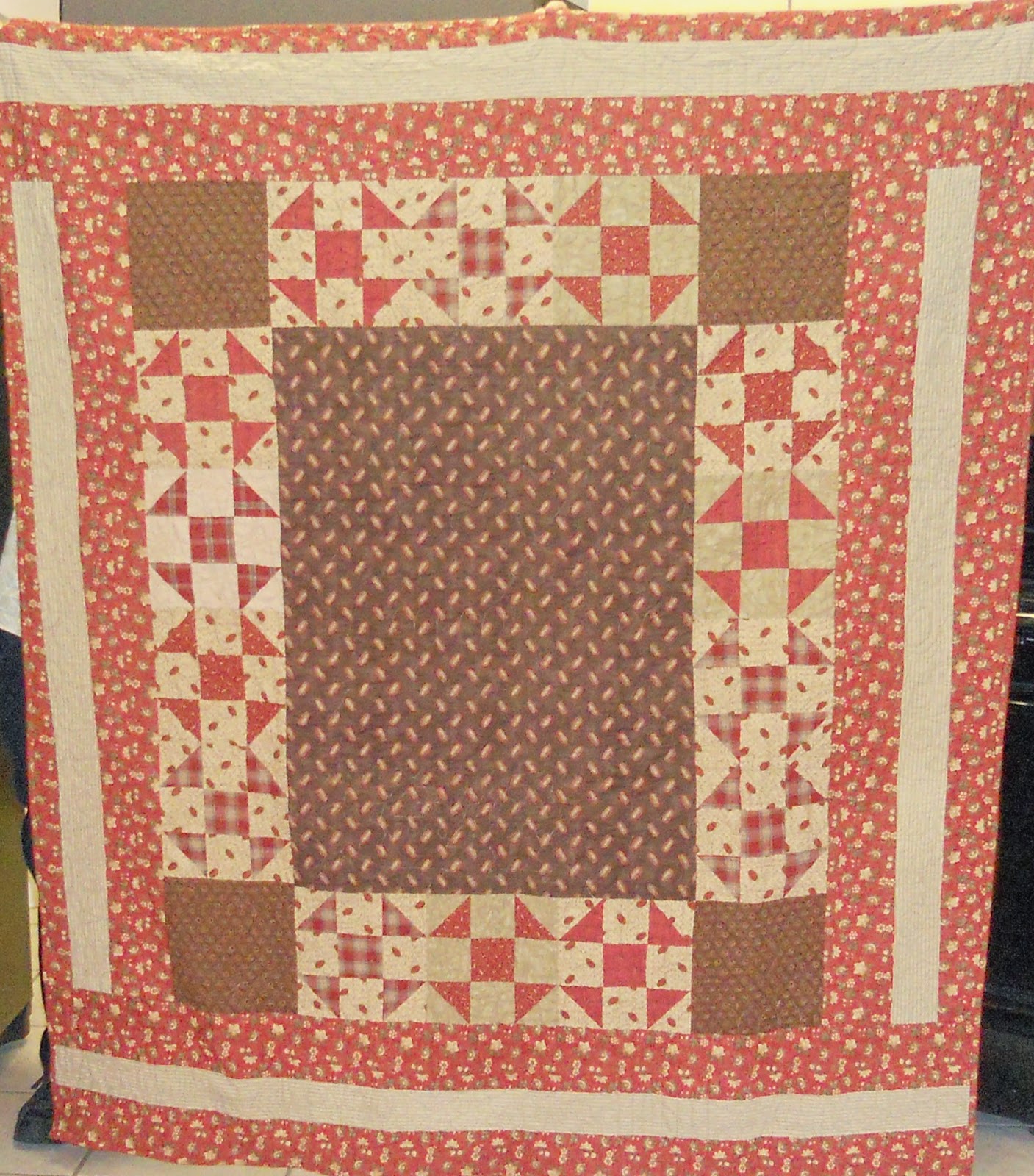 A finished quilt I am very happy with.
Karen
Posted by Karen at 3:00 PM 33 comments:

A new bunny quilt finished.  This one is called "Garden Bunny".  The pattern is from Need'L Love. 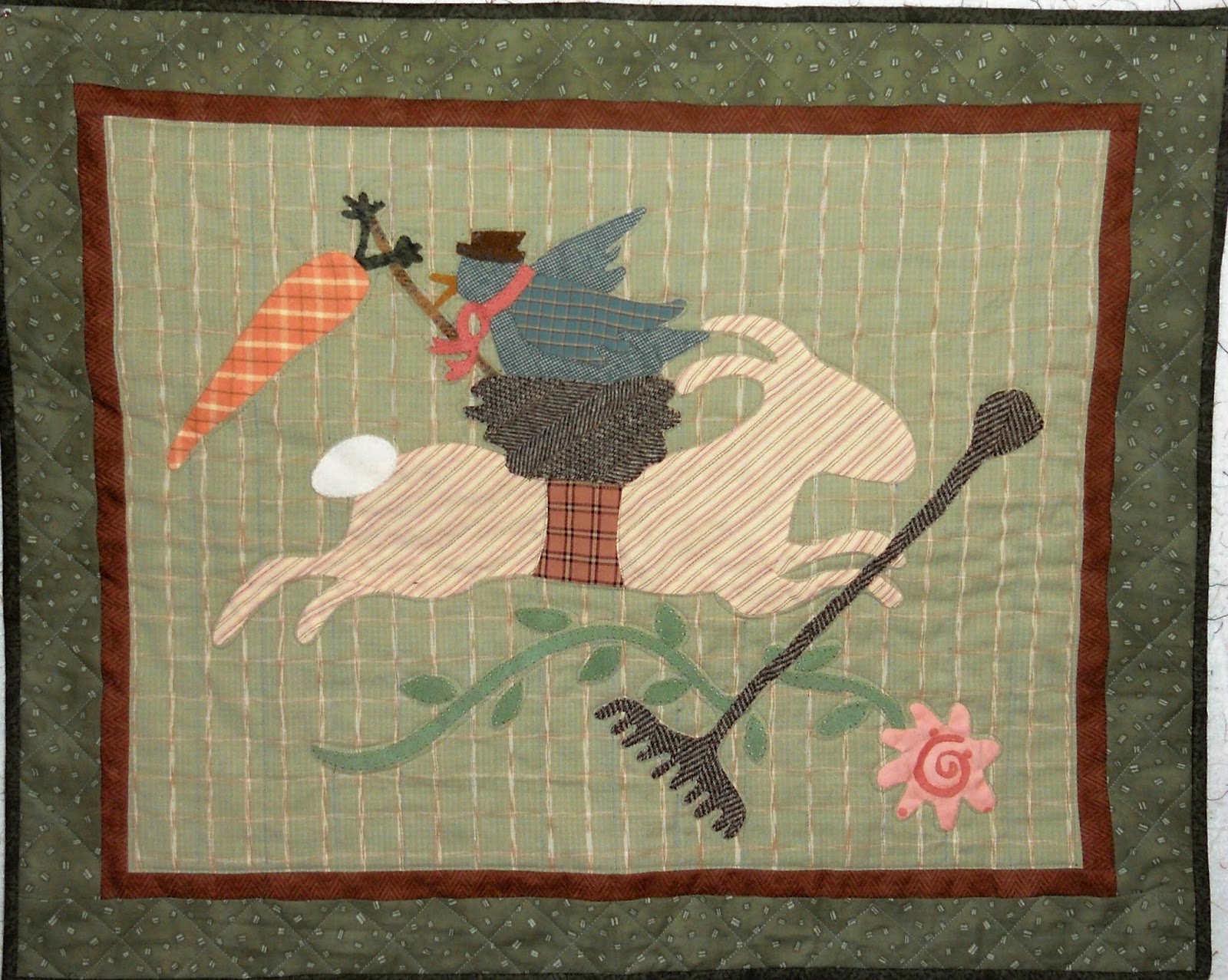 I used a combination of cotton and wool for the applique.  The pattern can be used for applique or you can use it to hook a rug.  I debated on whether to make the pillow with this applique design.  The pillow has a unique fence flap on each end.  No background.  Just the fence and it is made stiff using boning.  Below is a picture of the leaflet so you can see the pillow sample. 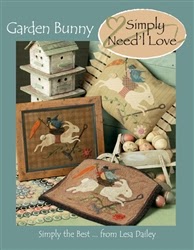 I have another bunny quilt close to being done.  The population of bunnies just keeps increasing at my house.
Karen
Posted by Karen at 1:23 PM 17 comments:

B Is For Bunny

Debbie from Woolen Sails has a new pattern called "B Is For Bunny".  It is one that can be for rug hooking, needle punch or wool applique.  I chose to do it in wool and a spring look.  A sweet bunny.  It is a design that could be used for a child if you chose to use it that way.  Pay Debbie's blog a visit and you can see her version done in needle punch. 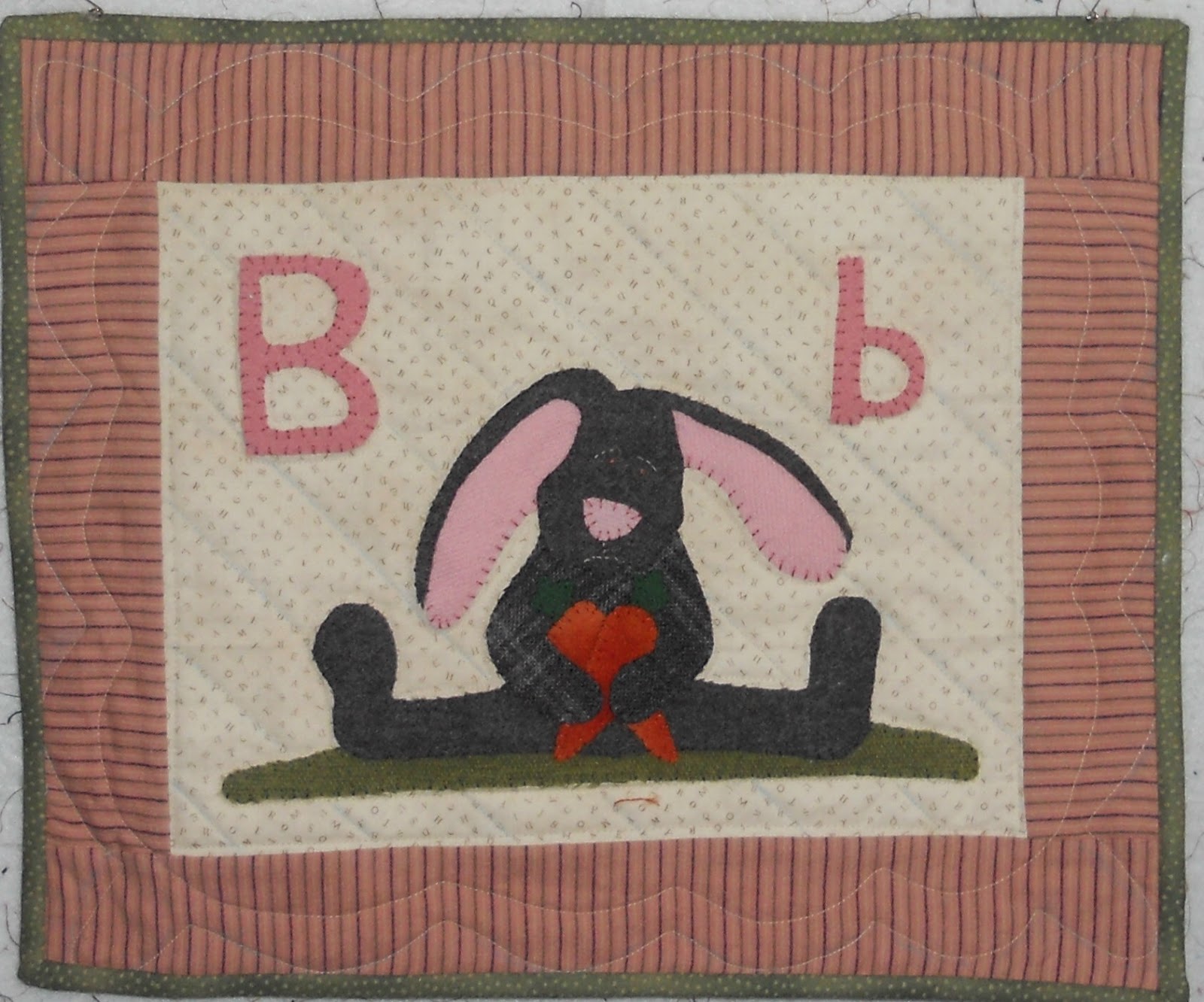 Hope you had time to sew on National Quilting Day.
Karen
Posted by Karen at 11:42 PM 14 comments: 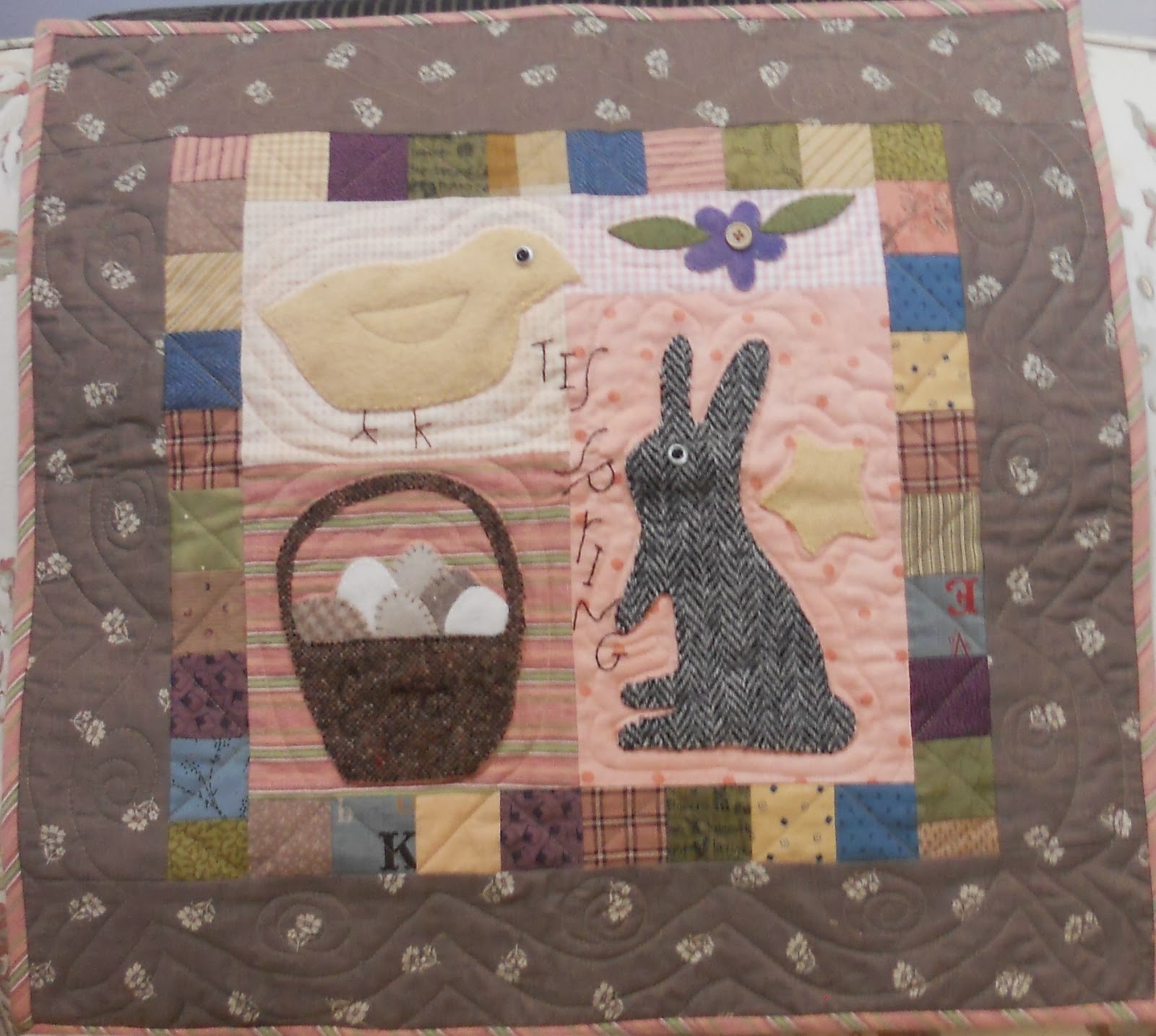 I used cottons for the background and wool for the applique.  A fun and easy quilt to make.  In my collection of quilts, I do not have many that make you think of spring so this is a good addition.  I am planning to make a couple more small pieces with a spring theme.

And spring has definitely arrived here.  So much pollen.  Last week I was sneezing and blowing my nose.  Not as much this week.

I have more to share but will do that in the next day or two.
Karen
Posted by Karen at 12:10 PM 26 comments:

Sweet Grace and Block 2 of BOM

I have had the blocks for "Sweet Grace" ready to go for a while now and finally did some stitching on them.

I am using a Jan Patek design.  The baskets were to be pieced and then stitched onto the background.  I chose to piece the basket section completely.  Just a little drawing in Electric Quilt to get the measurements.  Next up is a pineapple block of which there are three of.

I was a day late in finishing the second block for the "Piece and Plenty" block of the month I am doing. 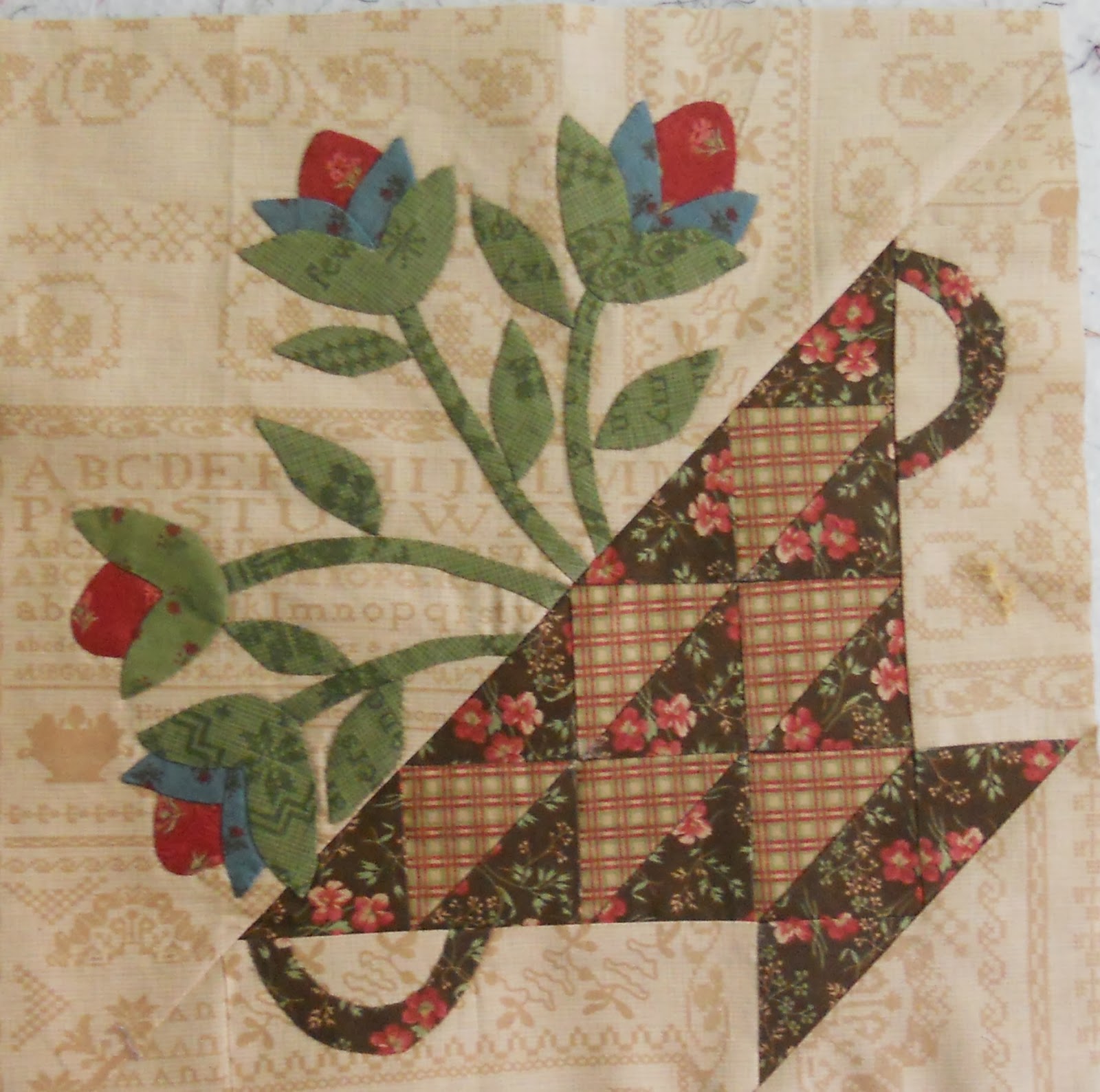 I like the background used for this block.  A Blackbird Designs sampler style fabric.  And most of the green in the block is from the same fabric design.  Just a different color.

I was working on a Cheri spring quilt design and am going to stitch the wool applique pieces down this afternoon.  I should have something new to show you soon.
Karen
Posted by Karen at 5:31 PM 25 comments: