The Pumpkin Seed shown in my previous post is now done.  It is approximately ten inches square. 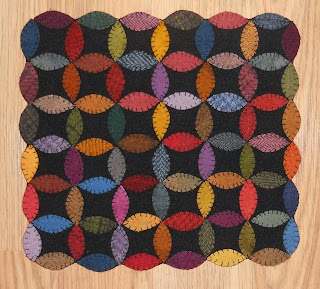 I used a brushed flannel plaid for the backing. To give you an idea of the process, I took some pictures.  I mentioned in my previous post that I obtained the seed shape from the Electric Quilt program but there are online images that you can find if you do a search.  The larger the seed, the more black you will see.  I traced the seed shape to Heat 'n Bond Lite, rough cut them outside the drawn line.  Then fused them to scrap pieces of wool.  I then cut on the line.  Once I had quite a few seeds ready, I began laying them out on black wool. Point to point.  I was not sure how large of a mat I wanted so I worked on a big piece of wool and then trimmed it down leaving some of the black wool extending beyond the outer edge of the seeds.  I fused the seeds down using an iron.  You could use any method of preparation that you normally prep your wool applique shapes.  I happen to like this method. 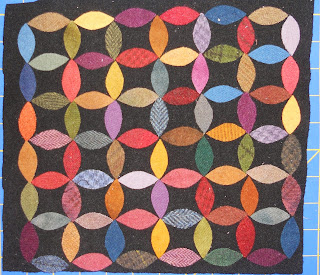 I used two strands of black embroidery floss and an overcast stitch but left the outer edge of the mat unstitched at this point.  I adhered the fusible to a piece of brushed cotton plaid that was a bit larger than I needed.  This was then fused to the back of the black wool. 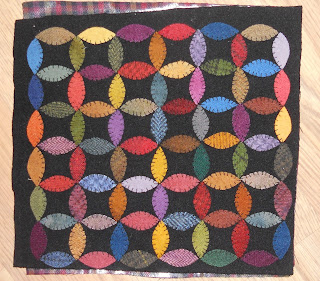 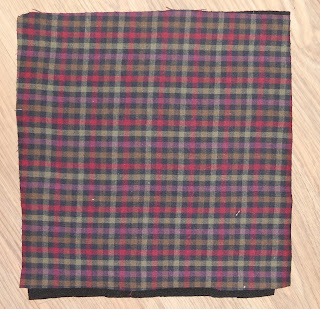 I trimmed the curved outer edges with sharp scissors before doing a button hole stitch with the black floss.  I was able to hide my knots between the layers of wool. 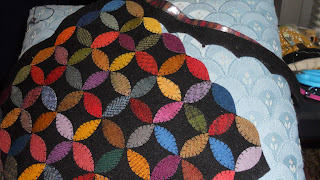 I am including a drawing of my pumpkin seed template.  I have never added a template to my blog post before so I don't know how this is going to work. 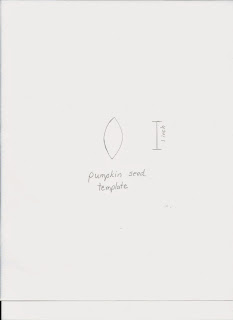 I can see making a larger size mat with only one round of the seeds around the outside edge and a blank inner space for some kind of wool applique.  Maybe done in spring colors with a rabbit.  If you make one of these wool mats, I would love to see a picture of it.

I absolutely love this! Thanks so much for the details and tips and the little template.
Hope to try this soon!

oooooo!!! Love it!! Thank you for the tutorial too...I bookmarked it for the future!!

That is a beautiful piece and I love the wool colors. That would be fun to do in a large quilt and take the time making it, and using up scraps from other pieces.

I love it! Thanks for sharing your process.

Hey, if you look at my blog, you will see your half square triangles!! Some of them, anyway!

Brilliant!! I printed off the template and it worked like a charm!! So adorable!! I loved the way you fused the cotton to the wool!!
P

Love your little mat and thanks so much for sharing how to make it!

Adorable little mat you have! You love to work tiny little pieces. Oh my gosh it is so small! Great work and congrats on the cutest finish of the week.

Beautiful finish Karen! love the jewel colours on the black, and the curved button hole edge is perfect!

Carla A Few Of My Favorite Things said...

Love the way it finished up!

I love the brushed cotton backing! We have a new quilt shop an hour away that has a large selection of brushed cotton and I am thrilled because it is my favorite to use as backing for hand quilting projects. Thanks for sharing!

Lovely finish! Thanks for sharing the tutorial as well.

So adorable, love the colors.

This is lovely, well done! Would love to try it. I think your idea for a new one sounds great, would love to see it!

Really pretty design. I am going to attempt to make one. 'Will post a photo with a link to your post when finished. Probably will wait until after the holidays :)

I just love it.

Love it and what a perfect use of leftover wool! Thank you for the how to.

This looks like a lot of relaxing fun and the finished piece is awesome! I just might have to give this a try! Thank you!

very cute and thanks for sharing your process! Love the way all the colors work together with the black stitching

Your pumpkin seed mat is so cute! I love how the black sets off all the lovely colors. The quilt on your header right now looks so nice!

So cute! It would look wonderful on an antique table top. Hmmm, I have just the spot...:)

Very nice Karen. I must add this to my to do list only maybe a little larger.

Thanks so much for all the helpful info! I'm saving the instructions and definitely plan to make one of these after the first of the year! :0)

Your mat is so beautiful. Thank you for the tutorial and the template.

Love it and thank you for the tutorial. Great use of wool pieces

I love everything about your pumpkin seed mat! Nice Job!! Thanks for sharing.

Dear Karen,
lovely work, love the colors. Thank you for your explanation and all the pictures on how to make it.
Greegtings,
Sylvia

That is absolutely darling and I think it would translate well to quilting cottons - since I'm allergic to wool - and I love the idea of using them as a frame around an applique. Well done tutorial Karen!

This is lovely... simple as that! Thanks for the tutorial on your method.

This turned out so cute! Thanks for showing your steps.

That is gorgeous!
Great inspiration for making one myself.

I love it and such a great way to use up woolly scraps.