A finish!  And a long time coming.  "The Circuit Rider's Quilt".  I used a pattern book by Jenifer Dick and the book is still available through Amazon.  I completed the quilt top in October of 2009.  Now it is January of 2020 so it has been close to 11 years in the making. 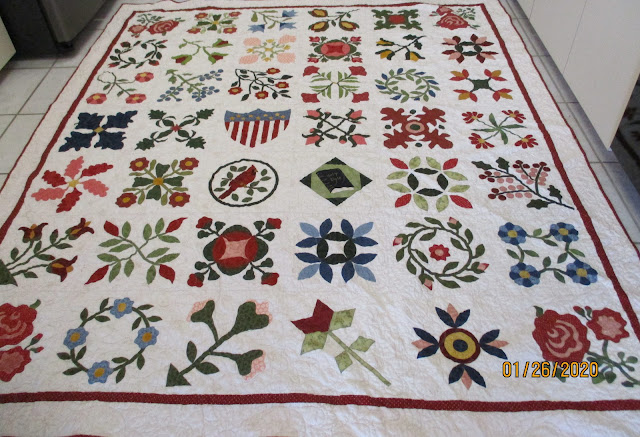 I intended the quilt to be used as fund raiser but it was not needed.  Thus the reason for staying a quilt top for so long.  Also, I would have done hand applique had I known I would be keeping it for myself.  Instead, I did fused applique.  I have thought many times of doing a second one using needle turn applique.

The cardinal block is not from the pattern.  There was a tree block that I chose not to make.

I don't have two people here to hold the quilt up for a photo so I will show close ups of blocks.  You can also do a search on my blog and see the blocks flat after they were machine stitched.  The quilt has been washed so has a crinkled look.  Some of the round shapes do not look as round with the crinkles but they were nice and round to start.  I debated whether to wash it or leave it flat after finishing.  Washing it was the end decision as I like it to have an older look.  Now I am thinking maybe I shouldn't have. 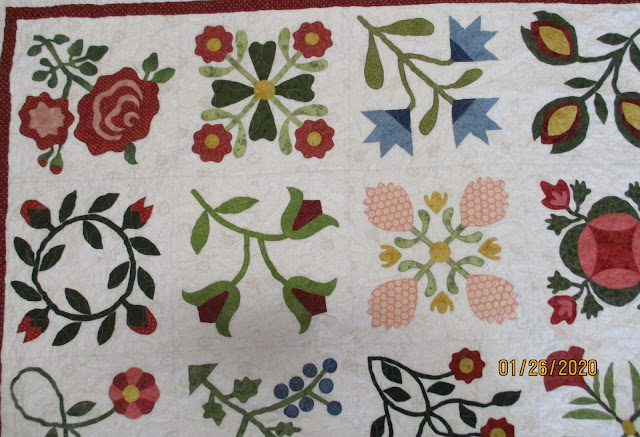 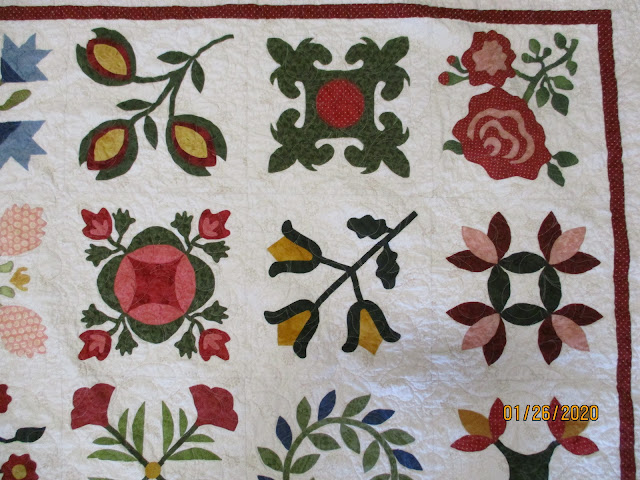 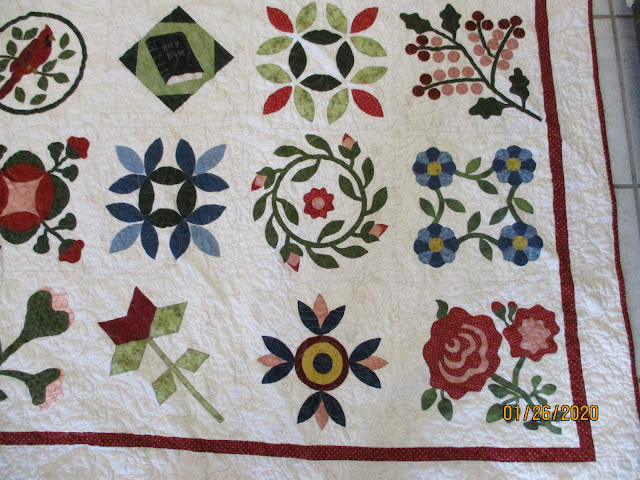 Thanks for paying my blog a visit.  And I enjoy reading your comments if you have the time to leave one.
Karen
Posted by Karen at 11:33 AM

Oh i just love that vintage look after washing;)))
this is definitely a work of art--I so admire your ability to make a quilt over such a long period of time. I'd like to find a pattern that I LOVE and begin a journey of my own. I am not a talented appliquer so I am hesitant to begin.........
This is an heirloom --so gorgeous...hugs, Julierose

It is beautiful. I do not feel so bad taking so long to make my Cherries Quilt. But then I have not started to quilt it yet. I am making the Ben Bigg's sampler with the wash away stuff. Not sure if I will be happy with it when it is finally done. I will be machine quilting that one.
Tell Julirrose that we get to be talented appliquers by appliqueing. You start with a few simple blocks and keep going.

I just love it!! You are such a talent...lovely quilt! I like the crinkled look...it is just so so pretty!!! I have the pattern...

Congratulations on the finish! And what a beauty?!
You know, they say masterpieces takes time, and in this case it is true.

I have always admired the Circut Rider's Quilt and your quilt is no exception. It's quite an accomplishment. I read your comment on another blog and you mentioned you had bought a new machine. What kind did you get? I've been sewing on my 2nd favorite machine lately and for all it's bells and whistles - I still like the older one best.

Wow so beautiful! Love it and if you ever tire of it, I would be willing to provide a loving home lol.

I love it and everything about it!! I like washing my quilts too, but sometimes they look better before washing.

What a delightful quilt--and it taking so long to finish just makes it even better!
so enjoy it cause it is beautiful--
luv, di

Nice to see all the blocks together in one quilt top. Looks great!

That is a gorgeous quilt! Kind of fun to discover you can keep something that you worked so hard on, thinking it was going to be a donation!

Your quilt is beautiful. I know how much you prefer hand applique, but the blocks are lovely and better yet. Its finished you hopefully, you'll enjoy using it. It's been COLD in Florida!

It's beautiful! So many interesting blocks - it would be fun to make again I think :0)

I love the quilt and like the washed look.

Love this quilt. I wouldn’t change a thing in this quilt

Lovely quilt, congratulations on your finish, such a nice feeling!

It’s a beautiful quilt. I always debate whether to wash or not, too. I have a friend who actually presses her quilts if she has to wash them.

Such beautiful blocks! And I love the cardinal; it truly belongs there! Congrats! On another beautiful quilt finish!

such a beautiful pattern. who did the quilting?

Well, it was worth the wait to get this beautiful quilt finished. I know what you mean about wishing it was turned edge applique, but there are only so many hours in the day and so many quilts calling to us. Your fabric choices and colors are lovely, as always--congrats!

Oh, I am so happy to hear that I am not the only one who keeps UFO's for years and when they are worthy (like this one!) they finally get finished. I love it. It is simply gorgeous!

Karen your quilt is beautiful. I too have many, many quilt tops that need to be quilted. Hugs

I made this quilt too and I know how special it must be to you! You did a lovely job on it!

It's a lovely quilt. I am so glad that it has been quilted and you featured it on your blog!!

That is a gorgeous quilt and even fused it is beautifully done. I have thought of doing fused and machine appliqué, be nice for kids quilts too.

It is a beauty, Karen! That is a lot of work, even to machine applique. Must feel good to have it finished!

Wonderful to have it finished and I love the look of washing a quilt. The blocks are so interesting and beautiful! Lots of time and effort here!

It's a wonderful variety of blocks! It looks lovely and like many others I love that crinkly antique look as well.

Such a beautiful quilt Karen!